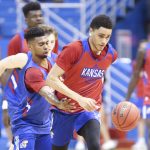 Kansas freshman Tristan Enaruna pushes the ball up the court as fellow freshman Issac McBride defends during a scrimmage on Tuesday, June 11, 2019 at Allen Fieldhouse.

With his new teammates eyeing the end of summer workouts and a three-week break from the grind before the start of school, Kansas freshman Tristan Enaruna is preparing for competition.

Playing with the Netherlands national team at the FIBA Europe Under 18 Championship in Greece, Enaruna for the past couple of weeks has been back in his home country playing in tune-up events and practicing with his countrymen in preparation for the FIBA event that runs July 27 through Aug. 4.

The 6-foot-8, four-star freshman who came to Kansas from Wasatch Academy in Mount Pleasant, Utah, originally hails from Almere, Netherlands, a city of more than 200,000 citizens in the province of Flevoland.

Such an adventure is certainly nothing new for current or former Jayhawks.

Just a couple of years ago, after committing to KU in August of 2017, current KU junior Silvio De Sousa competed with the Angolan national team at the FIBA AfroBasket event in Senegal and Tunisia. Former KU guard Svi Mykhailiuk also represented his home country of Ukraine in three different FIBA events while with the Jayhawks.

Even Enaruna himself has FIBA experience, having played power forward for his national team in August of 2017, when he averaged 13.3 points, 6.4 rebounds and 1.4 assists per game for the Netherlands at the FIBA U16 European Championship in Bulgaria.

This time around, Enaruna’s native Netherlands is one of 16 European countries competing at this year’s event, and the Dutch have been placed in Group D, where they will face Finland, Croatia and Spain in pool play games before the 16-team bracket is set.

Bracket play is scheduled to begin July 31, with the quarterfinals taking place Aug. 1, the semis on Aug. 3 and the title game set for Aug. 4.

While Enaruna’s role in this event figures to be different than the one he’ll take on with the Jayhawks, his goals throughout the summer remained the same and focused on one thing.

“For me, what’s really important right now is just having a killer mindset going into every game,” Enaruna said earlier this summer. “Every part of my skill set has a lot of room to become better, shooting, passing and dribbling, but also being a leader, being vocal for the guys.”

While that killer mindset he hopes to develop includes as an aggressive offensive weapon, Enaruna said when he committed to Kansas that he enjoys all aspects of the game and prides himself on passing, defending and rebounding as much as scoring.

“I like to handle the ball and get my teammates involved,” he said in May. “I really like to pass. People think that I’m really looking to score a lot, but I love passing.”

The highest rated of the five freshmen and six newcomers on the 2019-20 Kansas roster, Enaruna believes in the idea that he’ll earn everything that is given to him, from opportunities in practice to minutes on game nights. And his whole focus is not to show flash and shine but rather to be a reliable option for his coaches and teammates.

“Just somebody who really wants to play hard and show what he’s got to everybody that’s watching,” Enaruna said. “I would say (people can expect) a lot of improvement. I think I will be a whole different player last game of the season than first game of the season.”