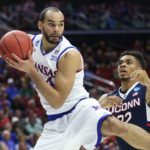 Kansas forward Perry Ellis (34) catches a pass in the paint before Connecticut forward Shonn Miller (32) during the first half on Saturday, March 19, 2016 at Wells Fargo Arena in Des Moines.

Ellis, who spent the early portion of his pro career playing in the NBA’s G League as well as overseas in Australia, Italy, Germany and Turkey, has plans to add a new stamp to his passport.

According to a report from Sportando.com, Ellis has agreed to join the Osaka Evessa club in Japan for the upcoming season.

Ellis, a four-year star at Wichita Heights before coming to KU, spent last season split between Germany and Turkey.

“I’ve been working out hard,” Ellis said while recently back in Lawrence. “You just never know what’s going to happen. I’ve been playing overseas and I’ll just kind of see if an opportunity comes up and if not just go overseas and continue to play.”

While some players on the Self Made roster have played in the tournament before, this will mark the first team made up entirely of former Jayhawks.

As was the case every time they stepped on the floor at Allen Fieldhouse or in a KU uniform, Self Made has just one goal in mind — to win it all.

“That’s the goal, man,” Ellis said recently. “It’s like a tournament like March Madness. If you lose, you’re out, so it’ll be fun.”

Self Made opens play in the TBT at 6 p.m. on July 25 against Sideline Cancer at Wichita State’s Koch Arena. For more information, or to purchase tickets, log on to www.thetournament.com.