Schedule, uniforms set for Self Made squad in TBT 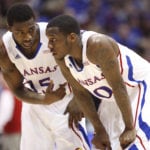 Kansas guards Tyshawn Taylor (10) and Elijah Johnson go over a gameplan against Texas during the first half on Saturday, March 3, 2012 at Allen Fieldhouse.

Ten former Jayhawks are now just two weeks away from returning to the court in crimson and blue.

Self Made, a 10-man team put together by former KU guard Elijah Johnson for a run at the $2 million prize in this year’s edition of The Tournament, is putting the final touches on their plans for the big event.

Johnson, who graduated from KU following the 2012-13 season, has said that the team will host a training camp of sorts in Lawrence before heading down to Wichita later this month.

Each team that advances out of the eight regional sites will travel to Chicago for the final three rounds, slated for the first week of August. According to the TBT website, the prize for winning the Wichita regional is nearly $60,000.

The full bracket, along with information on tickets, can be found at thetournament.com and the website is even offering a bracket challenge for fans.

A win there would put the former Jayhawks into a 3 p.m. matchup with the winner of the 2-7 game between AfterShocks (Wichita State) and Iowa United on July 27.

The regional championship game is slated for 3 p.m. on July 28. All games will be played at Koch Arena and will be broadcast on ESPN.

“ESPN took a chance on TBT by streaming our first ever championship game in 2014 and we’ve been with them ever since,” said Jon Mugar, founder and CEO of TBT, in a news release announcing this year’s bracket. “It’s hard to believe we’ve gone from 2 hours streaming in 2014 to all TBT games available on the ESPN App and 48 hours on linear TV in 2019. It’s a testament to their commitment to the event and how our relationship has grown.”

Self Made this week also got a look at its uniforms for the event. Sponsored by Puma, the jerseys are blue with the words “Self Made” written in white and outlined in red across the chest.

Taylor, the former KU point guard who played with Johnson and helped lead the Jayhawks to the 2012 national title game, recently said the formation of an all-KU team in the event has added to the fun.

“This will be my fourth time playing,” Taylor said. “So I’ve been in it a couple of times, and for guys in my situation, overseas guys who come home for a couple of months in the summer of just one-on-one training with your trainer, I think it’s good.

“For me, it’s great because I’m playing basketball, playing pickup in high school gyms with high school kids and college kids all summer anyway. So, I mean, make it for $2 million and sign me up.”