Did former Jayhawk Devonte’ Graham catch a break or a bad deal with Charlotte on Sunday? 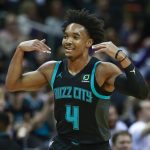 Charlotte Hornets guard Devonte' Graham gestures after making a 3-point basket during the second half of an NBA basketball game against the Orlando Magic on Monday, Dec. 31, 2018, in Charlotte, N.C. The Hornets won 125-100. (AP Photo/Jason E. Miczek)

If you follow the NBA at all, whether for the superstars and sensational storylines or the former Jayhawks scattered throughout the league, you surely know by now that some pretty big things went down on Sunday evening.

Kevin Durant and Kyrie Irving to Brooklyn. Kemba Walker to Boston. Al Horford to Philadelphia. D’Angelo Russell to Golden State. Jimmy Butler to Miami. And a dozen or so more free agent commitments that figure to reshape the immediate future of the NBA as we know it.

While all of those names and moves made headlines because of their star power and potential impact on the 2020 NBA title, one of them had an impact on a former Jayhawk that should be pretty significant by the time the 2019-20 season rolls around.

Walker’s departure from Charlotte opens the door for former KU All-American Devonte’ Graham to step into a much bigger role with the Hornets during his second season in the league.

Graham, you probably recall, spent most of his rookie season bouncing back and forth between Charlotte and the Hornets’ G League affiliate, playing solid but spotty minutes with the big club while absolutely crushing the competition at the G League level every time he went down.

That experience surely helped Graham (6-foot-2, 185 pounds) develop his pro game and also likely boosted his confidence. It’s one thing to drop 30-point game after 30-point game in college. It’s something completely different to do that — and more — against professionals.

Graham’s path to big time minutes is not completely clear, however. In response to losing Walker to free agency, the Hornets signed former Boston point guard Terry Rozier to a 3-year, $58 million deal, presumably with the idea of handing Rozier the keys to the Charlotte offense for the 2019-20 season.

Interesting move to be sure. And one that Graham could both benefit from and be hindered by in the months ahead.

Rozier, you might not know, is a fourth-year NBA vet out of Louisville (2015 Draft, No. 16 overall pick) who, like Graham thus far, spent the early days of his professional career bouncing back and forth between the NBA and the G League with Boston.

Those numbers are noteworthy because they’re not all that different from what Graham gave the Hornets if you factor in the money.

So here’s where the Hornets sit. Instead of handing the job to Graham after what amounts to less than half a season in the NBA, they went out and paid major money to a guy with more experience.

It’s hard to know. And it’s hard to blame them for doing something other than just giving the job to Graham. There’s no doubt that the former Jayhawk has what it takes to play at that level. But to do it as the primary point guard for 82 games with half a season of experience is a big jump for any rookie to make.

At $1.4 million this year, Graham certainly seems like the better value option for the Hornets. But they had to sign someone to handle the job with him.

Maybe they overpaid for Rozier. Maybe Rozier’s a star in the making. Maybe Graham will win the job — eventually — and make Rozier’s monster contract even more of a head-scratcher than it already is.

But that’s too many maybes for an NBA team that’s trying to compete and build itself into a contender.

So don’t look at the Rozier signing as a slight to Graham. Look at Walker’s decision to move on as the break Graham needed.

His minutes should go up this season. And he should have a real chance to crack the rotation on a regular basis. What he does from there is up to him.

But if Rozier’s career path — and its similarities to Graham’s — are any indication of what’s possible, Graham should be completely content with the position he’s in and hungrier than ever.

In two or three more years, that type of contract could be his.