Kansas forward Mitch Lightfoot making the most of redshirt season 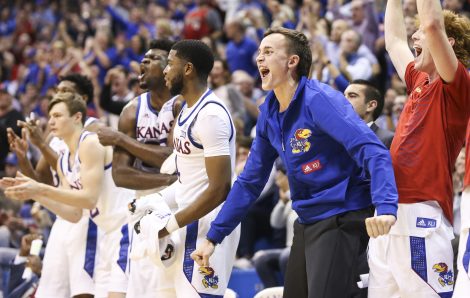 Ten games into redshirting his fourth season at Kansas because of his desire to find a greater role in the future, KU forward Mitch Lightfoot has remained a key part of the Kansas basketball program.

In addition to providing leadership, encouragement and tidbits of advice to his younger teammates, Lightfoot suits up with the red squad during practices and tries his best to prepare his teammates for the next opponent.

“It’s been good,” the KU senior said of the first 10 games of his redshirt season before Tuesday’s holiday shopping outing at Walmart in Lawrence. “I’ve been grinding, getting better. I’m playing my best ball right now, so I’m just excited for the rest of this year, excited to see how the guys perform and excited to be a part of this team.”

Called by coaches the type of player who would have a Jayhawk fly out of his chest if you cut him open, Lightfoot admits that game nights have been the toughest part of embracing his new role.

Almost always the first Jayhawk onto the floor for pregame shoot-around throughout his career, Lightfoot still holds that distinction. This season, however, that marks the only time that he’s in uniform.

“That sucks,” he said. “Going out there and seeing all them go out there and get ready to play and then you’re changing into street clothes in the locker room, it sucks. But at the same time it’s going to be worth it. These guys are doing a great job right now so I’m pretty proud of them.”

Despite not logging any minutes, Lightfoot has found a way to make the most of the season so far. In some ways, he said his decision to redshirt the 2019-20 season, thus preserving his final year of eligibility for the 2020-21 campaign, has allowed him to reach a new level of understanding about the game he loves.

“It’s nice to be able to take a step back and really go over the scouting report,” he said. “I go over scouting report more now than I felt like I did even when I was playing just because I get to learn from the guys I’m playing in practice and show them how to guard (their opponents) and how they play and things like that. I’m giving it my all and hopefully that helps them.”

After considering the move during each of the past two offseasons, Lightfoot finally made the decision to redshirt just before the start of the 2019-20 season. The biggest reason was the presence of three bigger bodies in the KU front court in Udoka Azubuike, Silvio De Sousa and David McCormack.

At the time of his decision, many believed that Kansas would spend most of the season playing with two big men on the floor. And while that has been true for chunks of each game — including at the opening tip in all 10 thus far — KU coach Bill Self has elected to play small a lot more than people expected, limiting the opportunities for KU’s big men to impact the game.

De Sousa and McCormack are both averaging fewer than 17 minutes per game and De Sousa has played single-digit minutes in half of KU’s games to date.

With those figures providing a strong case that Lightfoot made a sound decision, the senior from Gilbert, Ariz., who has played in 95 career games with the Jayhawks said this week that he was comfortable with his decision and making the most of whatever opportunities he does get to help his team.

“Honestly, it’s about what I thought it would be,” he said. “I’ve got a little experience so I try to give them some tips and pointers and they all do a great job. I’m really proud to be a part of this team.”

Lightfoot has been on the bench for every game, traveled to Maui with the team in November and will be there on Saturday, in Philadelphia, when the top-ranked Jayhawks (9-1) take on No. 18 Villanova (8-2) at Wells Fargo Center.