Jayhawks jump two spots to No. 2 in latest AP poll 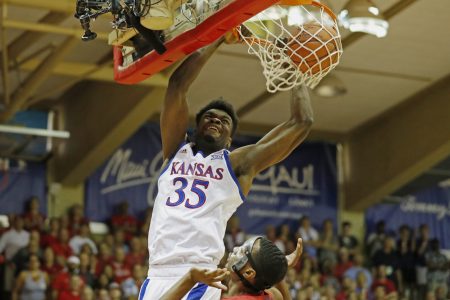 Three wins in three days in Maui was worth two spots in the latest Associated Press Top 25 poll, as the Kansas men’s basketball team jumped from No. 4 to No. 2 in the latest AP Top 25, released Monday morning.

“I’m not sure the win will have a ton to do with what we do going forward,” Jayhawks coach Bill Self said of his team’s Maui Invitational title. “It’s still November and I would like to think that that automatically puts us in a very good or favorable position. But if you don’t play well against Colorado, a top-20 team, next Saturday then this probably didn’t mean as much.”

Kansas (6-1), which received three first-place votes, sits behind unbeaten Louisville (7-0), which took over the top spot in the rankings after Duke’s loss to Stephen F. Austin at home last week.

Michigan went from unranked to the Top 5 following wins over Iowa State, North Carolina and Gonzaga in the Battle 4 Atlantis last week. Meanwhile, Dayton, behind the strength of its own solid showing in Maui, jumped into the Top 25 at No. 19.

The Wolverines and top-ranked Louisville will square off Tuesday night in the Big Ten/ACC Challenge.

The Jayhawks entered the 2019-20 season ranked No. 3 in the AP poll and dropped two spots to fifth after falling to Duke in the season opener at the Champions Classic in New York City.

KU jumped up a spot after Kentucky fell out of the top spot following a home loss to Evansville and remained there for two weeks before moving up this week.

With Texas Tech dropping out of this week’s poll following back-to-back losses to Iowa and Creighton, the only other Big 12 program ranked in the current AP Top 25 is No. 18 Baylor.

Colorado, KU’s next opponent, — 6 p.m. Saturday at Allen Fieldhouse — jumped a spot in this week’s rankings from No. 21 to No. 20, making KU’s next test another Top 20 battle.

After a week off and some time to reflect on the things they did well and things they still can improve on, Self said he hoped his team would look at Maui as the start of something memorable.

“Hopefully it’s just a springboard for enthusiasm and energy to excite our guys that we’ve got a chance to be good if we just continue to get better,” Self said.

Michigan had the biggest jump after receiving 12 overall votes last week. No. 6 Ohio State and No. 14 Auburn were next, each moving up four spots.

No. 25 Utah State had the biggest drop, falling 10 places after losing to Saint Mary’s on Friday. No. 11 Michigan State tumbled eight spots after going 2-1 in the Maui Invitational. No. 21 Tennessee dropped four places after losing to Florida State and beating Virginia Commonwealth at the Emerald Coast Classic.

No. 17 Florida State is ranked for the first time this season after beating Tennessee and Purdue to win the Emerald Coast Classic. No. 19 Dayton moved into the Top 25 for the first time since 2015-16 following a strong performance at the Maui Invitational. The Flyers (5-1) knocked off Georgia and Virginia Tech before taking Kansas to overtime in the title game. No. 24 Butler moved into the AP poll for the first time since hitting as high as No. 11 in 2016-17 after winning the Hall of Fame Classic in Kansas City. The Bulldogs (7-0) beat Missouri, then took down Stanford 68-67 on Kamar Baldwin’s 18-foot jumper.

Florida dropped out from No. 24 despite beating Saint Joseph’s, Miami and Xavier to win the Charleston Classic. Xavier was out from No. 25 following the loss to the Gators in the title game. Texas Tech took a massive fall after losing to Iowa and Creighton at the Las Vegas Invitational, dropping out of the poll from No. 12.

Here’s a look at this week’s complete AP Top 25: