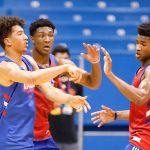 It’s been a little more than six weeks since Jalen Wilson first stepped foot on KU’s campus with the knowledge that he would be wearing crimson and blue next season.

And in that short time, Wilson has immersed himself in all things Kansas basketball tradition.

Talking about his adjustment to KU and Lawrence in a short video put out by the KU Basketball Twitter account on Thursday, Wilson zeroed in on some of the KU traditions that have wowed him since he arrived.

“Having so many people up there, you know, Paul Pierce is someone I really loved and the great Wilt Chamberlain… Being here where he played is crazy to me,” Wilson began while looking up at the retired jerseys in the Allen Fieldhouse rafters. “Just how much history (is here) and how many great Hall of Famers have been through this gym, being in the next class to be a part of that is still not even real to me yet.”

A late addition to the 2019 class, Wilson has yet to experience several of the traditions, large and small, that Kansas basketball has become known for throughout the years. But those days are coming. And Wilson has heard things. Through his official and unofficial visits to campus in the past, he’s also seen things from an outsider’s perspective.

“Really just like the history here,” Wilson said. “You know, the crowd. This is the best crowd you’re going to find in the whole nation in basketball and I wanted to be a part of that.”

Wilson, who initially was headed to Michigan but got a second chance at Kansas when former Wolverines coach John Beilein left for the NBA, will have to wait a few more months to actually experience that crowd for himself.

But the way he sees it, the small delay, which will bring with it the start of the fall semester, will give him time to reach the end of his adjustment period.

After arriving on campus on the heels of a whirlwind second stint of recruiting, Wilson’s head was spinning. He turned right when he should have gone left, couldn’t get into the KU locker room on his own for a few days and still had to unpack his belongings — and his thoughts — in a place he never expected to be.

But that’s all gone now. And in its place is a singular focus of a player who is thrilled to be a Jayhawk.

“I really just feel at home here,” he said. “Everything they told me, the future they see for me, what my role could be is everything I wanted, so I feel like this will be the best place for me to come and make an impact and win a national championship.”

The 6-foot-8, 215-pound small forward from Denton, Texas, who can play big or small, is driven by his desire to be the best and is comforted by playing for a coach and in a program that expect the same.

“Winning is the best thing about college,” he said. “When you win, everybody looks good and everybody feels good. It’s not about this and that. It’s just about winning. So I want to win a national championship and I would love to make a mark on the Big 12 and just play my game.”

"It’s the best crowd in the whole nation in basketball and I wanted to be a part of that.” #KUbball pic.twitter.com/zyfSLHhCty