Devon Dotson gets back on track as finisher, distributor 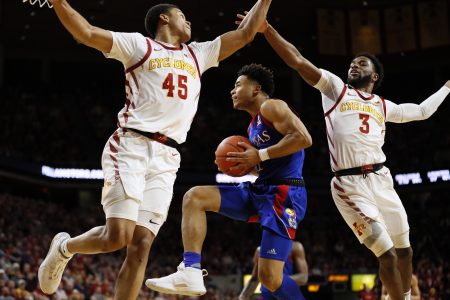 Maybe it was because his points and assists — and his team’s road win — came so easily Wednesday night at Iowa State, but no one on the Kansas basketball team spent much time during postgame conversations discussing the performance of point guard Devon Dotson.

“It wasn’t the most complete game we’ve played,” Dotson said following his team’s thorough, 79-53 whooping of the Cyclones. “I feel there’s some things we can learn from and springboard into the next conference (game). It’s just getting started. We’re looking to improve each and every game.”

From an individual standpoint, Dotson unquestionably did just that in Ames, Iowa, a good setting for that type of offensive revitalization this season. Not all defenses are as inviting to playmakers as Iowa State’s. But Dotson did himself and his teammates a favor by indulging in the Cyclones’ hospitality.

KU’s leading scorer (18.6 points per game), the 6-foot-2 lead guard went 15-for-45 (33%) from the floor in KU’s previous three games, during which he averaged 3.0 assists. Dotson was exactly 5-for-15 at Villanova, at Stanford and versus West Virginia, and in need of a slump-buster.

He found it at ISU the wise way, with layups, free throws (4-for-6) and easy points.

This was Dotson at his best — 20 points, 7-for-13 shooting, six assists, three steals, five rebounds and two turnovers in 34 minutes.

Never lacking in the confidence department, Dotson’s assertiveness reached parallel heights. As devastating as Udoka Azubuike can be in the paint, with his monstrous jams, Dotson can similarly dismantle defenses by getting to the rim. He scored five of his buckets at ISU on layups, one of them a wicked reverse in the first half that split two Cyclones, midair.

Dotson finished two of his lay-ins after stealing the ball away from Iowa State. Another he converted off the bounce in the half court. A fourth came in transition, off his own defensive rebound. The last completed a beauty of a backdoor cut, when Marcus Garrett rewarded the point guard for another layup.

A 31.7% 3-point shooter through KU’s first 14 games, Dotson knocked down two of his five 3-point attempts on the way to his big night. The most impressive of the two of those dropping off a crossover Dotson took into a step-back over his defender.

Even more promising for Dotson was his passing. He hadn’t posted more than four assists since KU’s Dec. 10 win over Milwaukee. But against Iowa State those individual numbers piled up for him as the Jayhawks’ lead grew.

Dotson’s passes set up three of Ochai Agbaji’s four made 3-pointers. The sophomore also fed Azubuike on the fast break for a layup, David McCormack for a midrange jumper and Silvio De Sousa for an alley-oop.

With Dotson establishing himself as a threat off the dribble to drive the ball to score or assist, the rest of his teammates combined to connect on eight of their 14 3-point tries, with Agbaji (4-for-5) and Christian Braun (3-for-4) repeatedly making ISU’s defense pay.

“It opens everything up,” Dotson said of the importance of KU’s 3-pointers. “When myself and Marcus get in there, or anybody gets in there, the defense collapses and it’s an easy kick-out, and (the shooter) knocks it down. So it keeps the defense honest, and it’s just good.”

Getting to the paint and all the way to the rim won’t be as easy against many opponents, including No. 4 Baylor, KU’s Saturday foe inside Allen Fieldhouse. But Dotson needed to get right and get back to doing what he does best against ISU. It should serve as a reminder of how lethal KU’s offense can look when he’s seeking out forays to the basket as both a scorer and passer.