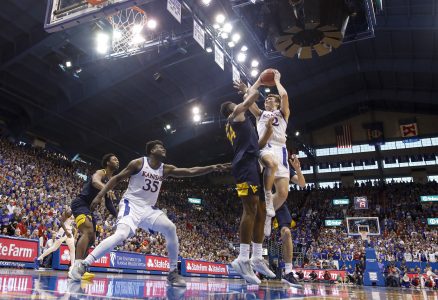 Kansas guard Christian Braun (2) goes hard for a bucket and a foul against West Virginia forward Oscar Tshiebwe (34) during the second half, Saturday, Jan. 4, 2020 at Allen Fieldhouse.

One poor opening to one Big 12 game isn’t going to cost Kansas big man David McCormack his starting job. But even if head coach Bill Self keeps the sophomore forward in that first unit for the remainder of the season, the Jayhawks still need a definitive four-guard lineup their coach can trust.

Self just may have found one in Saturday’s win over West Virginia, when McCormack’s presence in the first half wasn’t helping KU’s chances against the rugged Mountaineers.

That combination could become KU’s best lineup as the Jayhawks trudge their way through the conference schedule, with March Madness getting closer by the day.

This particular group of five players didn’t revolutionize what Kansas can do on the floor this year — Self said his team went from “awful to bad” offensively with four guards. Still, most college basketball teams can’t defend like WVU does. Plus, Self’s tough guy lineup endured that challenge, often willing its way to high-percentage shots in the second half, when such looks felt impossible to discover in the first.

Self rolled out the Garrett, Dotson, Azubuike, Agbaji and Braun lineup to open the second half, with the Jayhawks trailing 30-24. By the end of a 60-53 KU win that group played 15:59 together, and when they were on the floor KU outscored WVU by 18 — 34-16. The Jayhawks scored 1.26 points per possession with those five on the court, better than any other combination Self used versus the Mountaineers. The second-best offensive lineup (Dotson, Braun, Agbaji, Azubuike and Isaiah Moss) scored 1.06 points per possession.

These five resilient Jayhawks worked well defensively, too. Remember: They played 16 minutes and WVU put up just 16 points against them. And Self might have been able to stick with those five for even longer if Garrett hadn’t picked up his fourth foul with nine minutes left.

This lineup functions offensively by giving Azubuike the space he needs to operate in the post and catch lobs off screens, and featuring two of the team’s best 3-point shooters, Agbaji and Braun. Keep in mind, those two weren’t even a factor from beyond the arc (1-for-6 combined) against WVU and the lineup still thrived against what projects as the Big 12’s toughest defensive team.

Self thinks this KU roster can deliver a special season if its shooters knock down 3-pointers, so Agbaji (25-for-66 from deep this season) and Braun (8-for-23) will need to make that happen for the Jayhawks to truly become devastating offensively. It will be easier for all of KU’s players to find open looks from downtown against other opponents. WVU ranks fourth nationally in 3-point field goal defense, holding teams to 24.9%.

Back in November, when the season began, it wasn’t clear which four-guard lineup would be KU’s best. Senior transfer Moss was obviously the team’s best shooter, making him a leading candidate to play with Dotson, Garrett and Agbaji around the powerful Azubuike. Freshman Tristan Enaruna, too, looked like a legit option, with his versatile game on both ends of the floor and long wingspan. But if Braun, whose steady improvements of late have turned him into a reliable role player, can avoid any type of freshman skid, he’s the man for the job.

It’s far better for KU (11-2) to have a go-to lineup than always having to mix and match and tinker to find one. The group that led the Jayhawks out of the muck against West Virginia has some work to do to peak, and these five appear to have the physical and mental fortitude to mesh and grow together to pull that off.

KU will still need McCormack, Silvio De Sousa, Moss and Enaruna, too, of course. But its emerging four-guard lineup looks like one that can raise the Jayhawks’ ceiling.