Ben McLemore salvaging NBA career by fitting in with Rockets 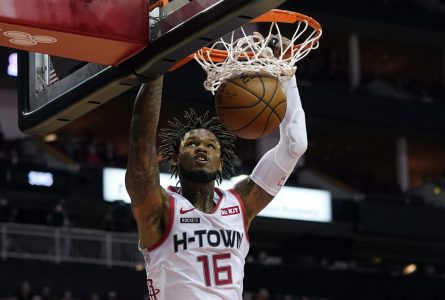 Houston Rockets' Ben McLemore (16) dunks the ball against the Phoenix Suns during the first half of an NBA basketball game Saturday, Dec. 7, 2019, in Houston. (AP Photo/David J. Phillip)

Earlier this year, six seasons after leaving the University of Kansas early for the NBA, Ben McLemore’s future within the world’s preeminent basketball league was beginning to look iffy.

McLemore never had taken off the way many — including the Sacramento Kings, who drafted him seventh overall in 2013 — figured. And when the organization that seemed to know the 6-foot-3 shooting guard best waived him this past February, ending his second stint in Sacramento, it looked like the rest of the NBA might be ready to move on without McLemore.

He didn’t latch on with another franchise, as roster spots became open. And even before the Kings cut McLemore, his 2018-19 season was one filled with inactive game days and instances of him suiting up but never checking in. McLemore encountered a slew of career lows: 19 games played, 8.3 minutes a game, 3.9 points per game, 39.1% field goal percentage, 66.7% free throw percentage, to name a few.

McLemore would have to wait until the summer free agency period to return to the NBA after getting waived. And it now looks like the Houston Rockets might have saved his career by signing him to a nonguaranteed deal.

In just a few months’ time, McLemore went from toiling and rarely playing on a sub-.500 team to becoming a key role player on one of the league’s most consistent winners.

The way McLemore explained it to The Athletic, head coach Mike D’Antoni “asked for me basically to be Ben McLemore. Shoot the ball, run the floor and guard.”

McLemore played on lousy to mediocre rosters in Sacramento during his first four NBA seasons and for another downright bad team in Memphis in 2017-18. In Houston, with a pair of former MVPs attracting all the attention, McLemore’s role really is as simple as he says. Defenders gravitate toward Rockets guards James Harden and Russell Westbrook, who handle the majority of the team’s shooting and passing.

Especially within the Rockets’ Harden-heavy half-court offense, McLemore often can just find an open spot behind the 3-point line, catch and shoot. The Rockets lead the league with their 45.2 3-point attempts a game, and even Harden and Westbrook can’t achieve that volume alone.

That’s where McLemore and Houston’s other complementary perimeter players come in. Through his first 31 appearances with the Rockets (21-10), McLemore is averaging 10.2 points per game — mostly off the bench — putting him in double figures for the first time since his second NBA season and only the second time in his professional career.

He’s making more 3-pointers per game (2.5) than ever before because he’s attempting them at a higher rate, too (6.9 attempts). While McLemore’s current 35.8% 3-point accuracy leaves him plenty of room for improvement, the Rockets want him taking those shots to space the floor for Harden and Westbrook, and because 3-pointers, layups, dunks and free-throw attempts are an emphasis for the organization — efficiency over everything.

Earlier in December, McLemore scored 17 points off the bench with the help of a 4-for-9 3-point shooting effort, helping Houston pull off a franchise-best 25-point comeback win against San Antonio. It was the ninth time this season — and fifth time this month — McLemore made at least four 3-pointers.

“Ben off the bench, starting, wherever you put him, he’s going to play really well,” D’Antoni recently told the Houston Chronicle. “His defense is always good. He’s a really good player that I can really count on, which is super.”

The Rockets need high effort, humble players to surround their two superstars, and McLemore appears to fit that mold perfectly.

The NBA’s leading scorer by a long shot, Harden (38.1 points per game) recently told The Athletic why he thinks McLemore quickly became an important supporting player for the team.

“He’s finally around some vets that know what they want (to) accomplish, and he knows his role,” Harden said. “Whether he misses or makes shots, I think his energy and his spirit he brings every game is something that’s huge for us.”

McLemore has never before been on a playoff team. That will change when this season ends. Come April, McLemore will get to experience his first postseason basketball game since he scored 20 points for the Jayhawks in a Sweet 16 loss to Michigan, in 2013.

He will never be a star in the NBA like he was for one All-Big 12 season at KU. But McLemore may end up adding several seasons to his NBA career with how well he has blended in with the Rockets.

Some advice Harden gave him a few months back, McLemore told The Athletic, proved useful as he’s redefining himself as an NBA player. The seven-time all-star and 2017-18 MVP told McLemore he could impact the game by doing “the little things” and providing energy.

“I just took that to heart. I want to do that consistently every night,” McLemore said. “It’s playing free, not thinking too much and just going out there and just playing the game.”

This morning @BenMcLemore hosted a catered meal from the Breakfast Klub for children who currently reside at Houston Serenity Place.#RocketsGiveBack