Video by Journal-World photographer Richard Gwin: Twin brothers Lane and Tate Anderson, 13, walk their hogs "Big Large" and "Mr. Pig" Tuesday in preparation for the Douglas County Fair, which takes place July 25 to July 31. The Andersons are members of the Palmyra 4-H ...

Burning off old growth at the Baker Wetlands

Journal-World photographers captured thousands of photos in 2015. Watch as Richard Gwin, Nick Krug, Mike Yoder and John Young present their favorite photos from the past 12 months. And take a look at even more photos in this year-end photo gallery. --- Mike ... 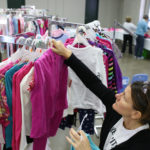 Video by Journal-World photographer Richard Gwin The Salvation Army of Douglas County helped area families shop for clothes, toys and other holiday gifts during its annual Joy Shop on Thursday at the Douglas County Fairgrounds. https://www.youtube.com/watch?v=hYcsjXV7QvU

Lawrence celebrated the holiday season the old-fashioned way on Saturday with its 23rd annual downtown Christmas parade. Journal-World photographer Mike Yoder captured the unique horse-drawn entries as they made their way down Massachusetts Street. Watch his video below and check out a ...

Three Journal-World photographers were spaced around KU's campus Wednesday morning as McCollum Hall came crashing down. Watch all three angles in the video below, and be sure to check out our main coverage of the implosion, including full length videos, crowd reaction and a photo ...

KU’s McCollum Hall came crashing down Wednesday after 50 years atop Daisy Hill. About 750 pounds of explosives spaced throughout the building detonated around 9 a.m., reducing the 10-story, three-wing, 220,000-square-foot residence hall to a pile of rubble. The 600-foot "evacuation ...

**Video by Lawrence Journal-World photographer Richard Gwin** (see below) Related story by Karen Dillon: **[Falconry rare in Kansas, with only about 50 licensed practitioners statewide][1]** > Falconry is an ancient form of > hunting, estimated to be about 4,000 > years old, and it was ...

**Video by Journal-World photographer Richard Gwin** (see below) Related story by Conrad Swanson: [Only in Lawrence: Couple learns a different way to hold the bacon][1] > You’ll find no bacon in the Whitney > home. Nor will you find pork chops or > a holiday ham. > > Not since the ...