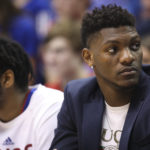 Kansas forward Silvio De Sousa watches from the bench during the second half, Saturday, Feb. 2, 2019 at Allen Fieldhouse.

If the appeal is granted, De Sousa will return to Kansas for the 2019-20 season. If it is denied, he will leave.

That much was learned Friday afternoon during an interview requested by the Journal-World, where De Sousa and his attorney, Scott Tompsett, sat down to discuss the forward’s future and the toll his ongoing battle with the NCAA has taken on his psyche, his game and his future.

Asked to clarify his plans, which were outlined in a letter sent by his attorney to the NCAA, De Sousa said he would return to KU if he’s allowed to play during the 2019-20 season.

And if the appeal is denied?

“I will be gone for sure,” De Sousa explained.

Throughout the 12-month ordeal that began with De Sousa’s guardian, Fenny Falmagne being linked to a payment from Adidas bag man T.J. Gassnola last April and included a two-year suspension by the NCAA in February and Thursday’s filing of an appeal by KU, De Sousa has remained upbeat and determined to help both himself and the Kansas basketball program in any way he could.

“When I got ruled out (in February), I remember thinking they took away the athlete, not the student part,” said De Sousa, who has a cumulative grade-point average of 2.79 but has seen it skyrocket to 3.5 during the current semester. “All I lost this year was just the opportunity to show what I could do. But, otherwise, I haven’t lost anything.”

In a letter of support sent along with KU’s formal appeal to the NCAA’s Student-Athlete Reinstatement committee, which will review De Sousa’s appeal, Tompsett wrote an impassioned plea for the committee to grant “immediate reinstatement of Silvio’s eligibility.” On Friday, he spoke with confidence that the desired outcome would be achieved.

“They get it wrong, but they don’t always get it wrong,” Tompsett said. “And, of all the cases that I’ve worked on, it’s hard for me to remember a more compelling case, strictly on just fundamental fairness. That’s why I’m confident that they’re going to look at this, hopefully with a different perspective and more clearly than it was looked at the first time, and I hope Silvio’s going to be playing next year as a Jayhawk.”

The review is expected to be heard soon and Tompsett said it was reasonable to expect a ruling by next week.

Stay tuned to KUsports.com for much more on Friday’s sit-down interview on De Sousa’s status and future.

Section of Tompsett’s letter to the NCAA that announces De Sousa’s decision to declare for the NBA Draft:

“Because the reinstatement staff has issued a two-year penalty against Silvio which will effectively end his career at Kansas if this appeal is not granted, Silvio intends to declare for the NBA draft under recently adopted rules which permit student-athletes to sign with agents and explore entering the NBA draft, but opt out of the draft and return to an NCAA institution without the loss of eligibility as long as certain rules are followed.

Silvio wants first and foremost to stay at Kansas. He competed in 20 games as a freshman (2017-18), averaging under nine minutes per game and four points per game. That was a good start for his freshman year, but Silvio wants and needs to stay at Kansas, both for his development as a basketball player and to get a college education.

Your Committee has an opportunity in this case to make a decision that will be life-altering for Silvio. If this appeal is denied, Silvio will be denied the opportunity to pursue his dream of playing basketball and getting an education at Kansas in preparation for the next chapter in his life, hopefully as a professional basketball player in the NBA. Silvio will be forced to pursue his basketball career overseas while forgoing the invaluable opportunity to get a college education at the same time as he develops as a basketball player. He will lose the advantages and benefits an advanced education provides for life after basketball.

However, if this appeal is granted — as it should be — Silvio will have lost a year of eligibility, but he will be able to continue both his education and basketball career at Kansas, which has been his dream since he was 16 years old. That is the only fair and just result.”