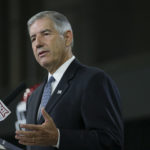 With reigning conference champion and national preseason No. 1 Kansas often coming up during the trial the past couple of weeks, Bowlsby was asked about possible ramifications for KU, the timetable for the NCAA looking into the matters addressed in federal court and how much of a black eye this has been for college basketball.

While Bowlsby said he had spoken with both KU basketball coach Bill Self and athletic director Jeff Long, the commissioner stated they weren’t at liberty to share a lot of information.