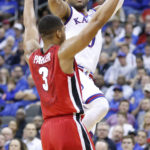 Kansas guard Frank Mason III (0) pulls up for a shot over Georgia guard Juwan Parker (3) during the first half, Tuesday, Nov. 22, 2016 during the championship game of the CBE Classic at Sprint Center.

1 – Frank Mason: Led the Jayhawks in scoring for the fourth time in five games with 19 points. He made 2 of 4 free throws and put the pressure on Georgia’s defense until tiring late in the game and mixed it up well enough to grab five rebounds. Also had three assists and three steals. He disrupted Georgia’s plans at both ends, even though it wasn’t one of his cleanest nights, as evidenced by his five turnovers. Earned all-tournament honors.

2 – Josh Jackson: Named CBE Classic MVP after another big night. Totaled 15 points with a game-high 11 rebounds, did a nice job passing from the high post, showed extremely quick hands on a blocked shot and moved fast in both directions in transition. Rebounds like a big man, but is not equipped to defend the post. He does slide his feet well enough to guard a point guard, if needed. Jackson understands the value of good ball movement and does his part to promote it by keeping the ball moving most of the time. For a man who can do such amazing things at such high speeds and altitudes, has trouble when standing still in a quiet arena. Has made just 11 of 23 free throws.

3 – Devonte Graham: Did a nice job of shutting down high-scoring Georgia guard (two points, nearly 17 below his average) until Kansas went to a zone, which was for about 30 minutes of the game. Didn’t stay hot from outside after coming out on fire Monday night. Made 3 of 9 three-pointers. Scored 14 points with two assists and four steals and had just one turnover in 36 minutes.

4 – Lagerald Vick: Has made just 1 of 11 three-point shots, which might be a disguised blessing because it will force him to look first for the drive, a good way for him to go because he’s so quick. Had his second eight-rebound game to go with nine points in 24 minutes.

5 – Dwight Coleby: Foul trouble forced him into the game and responded well playing, “by far,” the best of KU’s bigs, coach Bill Self said. Coleby blocked four shots, had four rebounds and two points before fouling out after 20 minutes of action. He said his leg is almost all the way back, but he still does not run as if his surgically repaired knee is at full strength yet.

6 – Svi Mykhailiuk: Georgia had quick defenders in its zone and Svi tends toward shooting worse against quick defenders. Made 1 of 6 three-pointers, picked up three rebounds, an assist and a steal without turning it over.

7 – Udoka Azubuike: Self explained that he only played five minutes because he has not had enough practice playing in a zone defense.

8 – Carlton Bragg: I don’t understand why Self played him 10 minutes and by that I mean I don’t understand why he played him that much. Yante Maten had his way down low with 30 points and 13 rebounds and Bragg was not able to help out to make life more difficult for him. Bragg had just three points and one rebound, which came at the offensive end.

9 – Landen Lucas: Might his foot, which requires him to wear a boot, be hindering him more than he’s letting on? Played 10 scoreless minutes, had more turnovers (three) than rebounds (two) and fouled out. He hasn’t looked like the same player who played such a key role in helping Kansas advance to the Elite Eight last season.

More news and notes from Kansas vs. Georgia 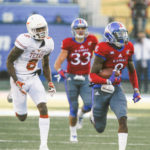 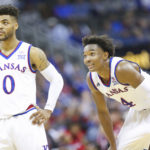 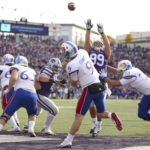 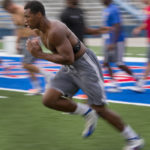