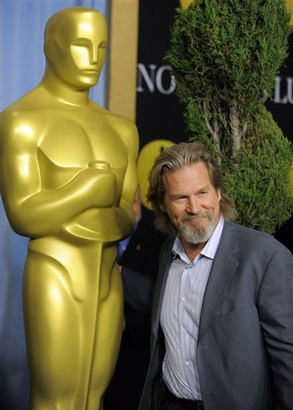 In order to warm up for predicting this year’s NCAA basketball tournament, it’s best to start with something a little less perplexing: the Oscars.

For once, the acting races are all but sowed up in the 82nd Awards (which airs Sunday), so it should be a cinch to forecast, right?

Well, not if you’re putting your predictions up against mine. I’ve given readers plenty of opportunities to trump me in various print/online contests over the years. And except for that one year with “No Country for Old Men,” I’ve been rather undefeatable.

To start this year’s squabble, I’m going to pick boldly (and/or foolishly) in two categories:

The first is actress. For some reason, I just can’t picture peppy Sandra Bullock winning the honor (and that’s not just because of the residual stench of “All About Steve”). The conventional wisdom is that the actress category is a foregone conclusion this year. I find that hard to believe, considering Bullock’s riding a horse as slight as “The Blind Side.” Instead, I’m counting on newcomer Gabourey Sidibe to score a huge upset for her emotionally taxing role in “Precious.”

The other prediction I’m sticking by involves best picture. I have said all along that there’s no way “Avatar” will win the top honor. It’s a science-fiction movie, folks. Those NEVER win a significant award among Academy voters. Instead, “The Hurt Locker” will be the victor in this expanded, 10-picture format. This clash presents the most interesting race in years. For once the drama will extend into the third (or fourth) hour of the telecast.

Here is my full roster of picks. I welcome all challengers in this very informal Oscar “contest.”

Performance by an actor in a leading role

Performance by an actor in a supporting role

Performance by an actress in a leading role

* Sandra Bullock in “The Blind Side”
* Helen Mirren in “The Last Station”
* Carey Mulligan in “An Education”
* Gabourey Sidibe in “Precious: Based on the Novel ‘Push’ by Sapphire”
* Meryl Streep in “Julie & Julia”

Performance by an actress in a supporting role

Best motion picture of the year