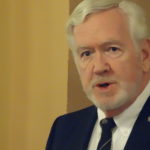 State Sen. Steve Fitzgerald, R-Leavenworth and a candidate in the GOP primary for the 2nd District, speaks with reporters Thursday, July 12, 2018, about earlier remarks he made saying everything outside of western civilization is "barbarism."

TOPEKA — State Sen. Steve Fitzgerald, R-Leavenworth, told reporters Thursday that he did not intend to disparage nonwhite, non-European cultures earlier this month when he said “Outside of western civilization, there is only barbarism.”

“I think the interpretation you mention, I think, is very inappropriate,” said Fitzgerald, a candidate in the GOP primary for the 2nd District congressional seat, in response to a question during a Statehouse news conference. “Western civilization, as I also said, is Christendom. It’s worldwide. It’s the dominant culture in the world, to tell you the truth, and what it’s based on is the respect of human values, human dignity and human life.”

For the record, an analysis by the Pew Research Center found that in 2015, Christians made up the largest single religious segment in the world, with about 2.1 billion adherents. But people of non-Christian faiths, including Muslims, Hindus, Buddhists, as well as others, accounted for a combined 5 billion population.

Fitzgerald originally made the comment during a July 2 gathering of Leavenworth County Republicans, a video of which is posted on the county party’s Facebook page.

That remark was first picked up by CNN. It has since been picked up by a number of national and state media outlets.

But at least two of his main rivals in the race, fellow Sens. Dennis Pyle, of Hiawatha, and Caryn Tyson, of Parker, declined to even speak on the record about Fitzgerald’s comments.

Pyle has run in the 2nd District primary before, in 2010 against incumbent Rep. Lynn Jenkins, and received 43 percent of the vote, despite being outspent by a 10-to-1 margin. Tyson, meanwhile, has been one of the more prolific fundraisers on the GOP side, although she has not yet released her second quarter finance reports, which are due July 15, and is said to have strong campaign organizations in each of the 25 counties in the district.

Speaking Thursday, Fitzgerald said his remarks were mainly focused on the issue of abortion.

“Our society is being degraded by a move away from our values, which respect life, respect the dignity of individuals, respect human rights,” he said. “And one of the biggest examples of that (is) the abortion situation, which I am also widely quoted on. It is a disrespect of human life that we do not defend the unborn and we do not have the respect for the dignity and human life of other people.”

“It’s somewhat typical of what you see in a Republican primary,” Democratic candidate Paul Davis, of Lawrence, said in a phone interview. “Oftentimes the most outrageous statements get attention and attract Republican primary voters, and I think that’s probably what Steve is trying to do.”

Davis is unchallenged in the Democratic primary for the seat that Democrats believe they have a shot at taking in 2018.

In June, the Davis campaign released a poll it had commissioned from the Mullen Group, showing Davis with the highest name recognition of all the candidates, at 43 percent, and the highest favorability rating, at 32 percent.

In addition, in a hypothetical head-to-head match-up against one of the GOP candidates — the firm chose Fitzgerald as a test case — the survey showed Davis leading by 5 percentage points, 39-35 percent, with a 4-point margin of error either way.

While the memo from the polling group said that puts Davis in a strong position to win, it also shows there are still a lot of undecided voters and a lot of voters with no particular opinion or awareness of any of the candidates, at least as of mid-June when the poll was taken.

Fitzgerald, however, who is running as a strong backer of the president, said he wasn’t concerned about that.

“I don’t believe that poll is going to be accurate as we get into the elections in November,” Fitzgerald said. “I project that Donald Trump is not going to be a detriment to any Republican’s campaign.”