The LHS baseball team piles on pitcher Matt Wiedeman and catcher Curtis Ledbetter after the Lions won the 6A State Championship against Maize, 2-0, on May 31, 2000.

All these years later, most of the coaches and players on the Lawrence High baseball state title team of 2000 can recall the Lions’ only two losses that season.

“Doubleheader at Shawnee Mission East,” said former LHS catcher Curtis Ledbetter, a senior on that team. “They had our number that day.”

And the Lancers were the only ones that season who could make that claim.

Twenty years ago Sunday, Ledbetter and the Lions hoisted the school’s second ever baseball state championship trophy after knocking off Maize, 2-0, in a weather-postponed game at KU’s Hoglund Ballpark.

The win, which came on the Tuesday after Memorial Day despite being scheduled for three days earlier, capped off a wild weekend in which the Lions rolled by Wichita Heights, 5-2, in Round 1 before surviving a scare in the semifinals against Wichita North.

The 3-2 win over North required a little late heroics. And it was Ledbetter’s sixth-inning solo home run off the scoreboard at Hoglund Ballpark that propelled the Lions into their third state title game in five seasons.

Facing a left-handed, knuckleball pitcher who gave the Lions fits all day, Ledbetter recently recalled his approach to that at-bat, which featured the all-state player falling behind 0-2 in the count.

“He had us all goofed up,” said Ledbetter by phone from Lincoln, Neb., where he played college baseball for the Huskers and now works as the program’s director of operations. “But I knew he wasn’t going to throw me a fastball in and he was going to keep working away.”

That was exactly the sequence Ledbetter faced, and he fouled off pitch after pitch to keep his at-bat alive.

“We were sitting there saying, if this pitcher comes anywhere near the zone, it’ll be a colossal mistake,” recalled then-LHS coach David Petry.

Finally, the mistake came. And Ledbetter made it hurt.

“I had to produce for our team,” Ledbetter said. “That was all there was to it. And, with this guy, I knew I was going to have to cover halfway into the other batter’s box if I wanted to get a pitch to hit.”

There was, of course, much more to that season and the Lions’ run at state than the bomb by Ledbetter, who hit .629 that season, a state record at the time. But those who lived it believe his key at-bat best captured the spirit and fight of that group.

“We were just a team and there was an expectation to win,” said Chris Johnson, who, as a sophomore, started at shortstop for the 2000 team. “We always knew we were going to find a way and we were going to do it the right way.”

For all of his pop and power at the plate, Ledbetter was happy to point to the LHS pitching staff as the biggest reason the Lions joined the 1996 team in the club of LHS baseball state champs.

“It all started on the mound for us,” he said. “Our arms always gave us a chance to win.”

Senior lefty Matt Wiedeman, who won both Game 1 at state and picked up the victory in the title game, finished the season 10-0 with nine complete games.

Senior Jon Murray, who finished 7-0 that season, got the win in the semifinals, throwing a complete game, two-hitter and striking out eight.

“I stepped into a very good situation,” said Petry, who won it all in his first season as the LHS head coach. “When you’ve got the best hitter in the state and two of the best pitchers in the state, that makes for a pretty good team.” 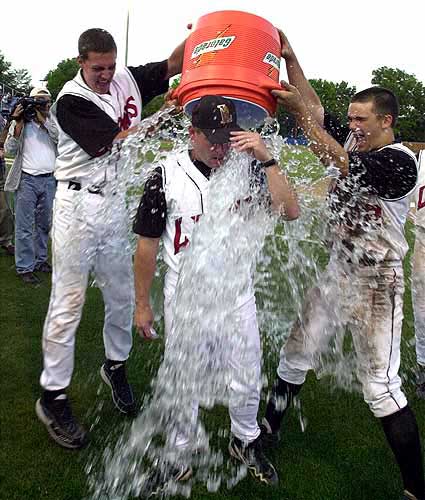 Lawrence High baseball coach David Petry is doused with water by
seniors Rob Etken, left, and Jon Murray after the Lions won the
Class 6A state championship against Maize, 2-0, on Tuesday at
Kansas University’s Hoglund Ballpark.

Rob Etken, who the Lions considered the best third option on the mound of any team in the state that year, would have pitched if LHS and Maize had played on Saturday. But the weather and state rules pushed the game back, which gave Wiedeman the rest he needed to come back one more time.

Petry’s approach to how to handle a team of experienced seniors was something that Ledbetter said was a key part of the championship season.

“It could’ve very easily been a situation where he came in and tried to put his mark on the program and make a name for himself,” Ledbetter said. “But he didn’t treat it like that at all. He knew we could be pretty good and he tried to do whatever he could to help us win.

“That group had a very good feel for the game, and we were very mature from a baseball IQ standpoint.”

Letting his players play and his veterans lead was Petry’s goal from the start.

“The first time I met with the team in the summer that was the thing I tried to emphasize,” Petry recalled. “One thing that was consistent was that we had won everywhere I had coached and that was my expectation for them. I never really talked about winning a state championship that year, but I wanted them to know that our culture was about winning.”

The 2000 Lions won at a higher clip (22-2) than any team in school history and helped keep Lawrence High baseball on the map for years to come.

“The gratification of saying, ‘We knew we had a chance, we went to work and we did it,’ that kind of set the tone for the 2000s,” said Johnson, whose junior and senior year teams both took third after reaching the state semifinals.

For Petry, the significance of winning a state title in Year 1 of his coaching tenure went beyond baseball and any personal gain.

“I just remember when the schools split (former LHS football coach Dick) Purdy said that no team at either school (LHS or Free State) was going to win a state title for 10 years,” Petry said. “And we found a way to get it done. It was awesome. It sure doesn’t seem like it’s been that long since we did it.”