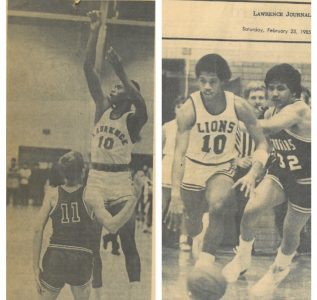 File images of Mike Harding Sr., left, and Mike "Scoop" Harding Jr., during their playing days — in No. 10 jerseys — at Lawrence High.

A longtime face of basketball at all levels in Lawrence is leaving town.

“I’d like to thank Coach Patrick Nee and Athletic Director Greg McVey for giving me my first opportunity to coach at the college level,” Harding said in a news release announcing the move. “Once I stepped on campus and was introduced to staff members, it just felt right.”

Harding, 51, earned his nickname during his senior year at LHS in 1986, and also teamed with Danny Manning to help lead the Lions in 1984. He has been a big part of the basketball scene in Lawrence for years, working various camps, including Bill Self camp, playing in parks and rec leagues and helping coach young players of all ages.

His dream is to one day be a head coach at the college level, and, after five years as an assistant to LHS coach Mike Lewis, he believes now is the time to take the first significant step in achieving that dream.

During his five seasons with Lewis at LHS, Harding, who played two seasons at Butler Community College before going on to play two years at Georgia Southern, helped lead the Lions to five consecutive state tournament appearances, including a second-place finish in 2015. A year later, LHS went 24-2 and finished third at state.

“I can’t thank Coach Lewis enough for giving me the opportunity to coach at LHS,” Harding said. “It’s been five awesome years of coaching at the school where me and my dad (Mike Harding Sr.) played basketball.”

“He understands how tough and competitive this conference is,” Nee said. “With strong ties in Lawrence and the Kansas City area, he will be a major asset with in-state recruiting.”

Also departing from Lewis’ staff this offseason is former Free State High standout Matt Green, who served as an assistant to Lewis for the past four seasons.

Harding is slated to start at GCCC on July 29.