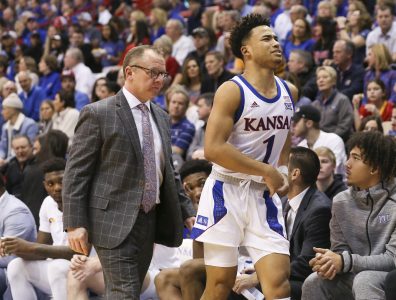 Kansas Jayhawks guard Devon Dotson (1) leaves the game with an injury early in the second half on Saturday, Jan. 11, 2020 at Allen Fieldhouse. Dotson later returned to the game.

Dotson, who missed about 10 minutes of Saturday’s loss to Baylor at Allen Fieldhouse, suffered a hip pointer to his left hip during the first half of KU’s loss.

The Jayhawks did not practice on Sunday, but Self said Dotson would be in the starting lineup on Tuesday.

“It’s a hip pointer,” Self reiterated. “So it’s going to be sore regardless. But it’s not one of those things that’s threatening to make it where you can’t play. But certainly, whenever you get it hit, it can make it uncomfortable where you’re thinking about it all the time. So he’s going to have to be mentally tough to get through that, but he can do that.”

Self said the team’s medical staff had pinpointed a play in the first half of the Baylor game, when Dotson tried to go over a screen on defense, as the moment the injury may have occurred.

“He did grab it right after that,” Self said. “But Devon couldn’t remember specifically (when it happened).”

Self said the first time Dotson felt the injury came after a KU turnover, when he was chasing a Baylor guard down in the open floor on his way to a layup at the other end.

“There’s no contact, but that’s when he felt it,” Self said. “Any time that you move in any direction it certainly puts pressure and stretches that area and can create pain. So we don’t think it was a big, big hit or a blow; we just think it’s something that he got, and now it’s just been aggravated.”

Although Self said Dotson’ injury — and, more specifically, the pain caused by it — likely would be an issue “every time he gets hit,” the KU coach noted that this particular injury is not typically a reason that a player would sit out.

“According to the reports I’ve gotten (from team medical personnel), it’s going to be sore,” Self said. “That’s not going away. But to say that there’s a risk of injuring it worse, I don’t believe that’s the case. … He’s tough. He’ll deal with it.”

Added KU forward David McCormack, when asked Monday how his teammate looked: “With film, we had walk-through and things like that and not much was bothering him.”