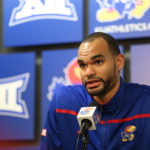 Kansas forward Perry Ellis talks with media members during a news conference following the NCAA Tournament selection show on CBS, Sunday, March 13, 2016 at Allen Fieldhouse on the campus of the University of Kansas in Lawrence, Kan. The Jayhawks were given the No. 1 seed in the South Regional and will play Austin Peay on Thursday in Des Moines.

As former All-Big 12 basketball forward Perry Ellis works toward completing his undergraduate degree, he knows he has a job waiting for him.

Jayhawks head coach Bill Self announced Friday evening that Ellis, a double-digit scorer for KU just three years ago, will join the basketball staff as a video coordinator once Ellis completes a sports management internship for his degree.

After suffering a knee injury this past summer, Ellis, a Wichita native, looked into returning to Lawrence to both rehabilitate and work on his degree.

“This opened up a cool opportunity for me,” Ellis stated in a KU release.

Self said Ellis’ internship hours should be completed “in the next month.”

Upon going undrafted in 2016, Ellis played professional basketball in the NBA’s G-League, as well as in Australia, Italy, Germany and Turkey.

Earlier this year, he joined other former KU players on the Self Made entry in The Basketball Tournament. A few minutes into a TBT game, Ellis injured his knee. Prior to that, Ellis had planned to play in Japan this coming season.

“Getting injured was God showing me a different path,” Ellis said, “preparing me for the future and to grow stronger as a person.”

Ellis currently ranks ninth on the program’s all-time scoring list, with 1,798 career points. He was a consensus second-team All-American as a senior, when he averaged 16.9 points and 5.8 rebounds and KU reached the Elite Eight.