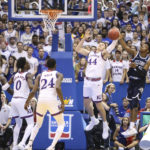 Kansas forward Mitch Lightfoot (44) battles for a rebound with Villanova forward Saddiq Bey (15) during the second half, Saturday, Dec. 15, 2018 at Allen Fieldhouse.

As the Kansas men’s basketball team plows ahead toward the start of the regular season, senior forward Mitch Lightfoot remains in limbo.

Serving as depth and experience on a roster loaded with big men ahead of him, Lightfoot enters the 2019-20 season facing the choice of playing a limited role behind players like Udoka Azubuike, Silvio De Sousa and David McCormack or electing to redshirt so he can return for another crack at his last hurrah.

“Mitch is a possibility,” said KU coach Bill Self on Wednesday, when asked if there was any news about redshirts on this year’s roster. “But I don’t believe there’s anybody else other than Mitch that would be a possibility. And we haven’t made that decision on Mitch yet.”

As was the case with current sophomore Ochai Agbaji a year ago, that “decision” might not come for quite some time.

Agbaji, who opened the 2018-19 season with the idea of redshirting was called into action midway through the season when injuries left the Jayhawks looking for reinforcements.

If injuries were to become an issue in the Jayhawks’ front court this year, Lightfoot likely would prove to be a very valuable insurance policy of experience, toughness and a whatever-the-team-needs mentality.

But if everyone stays healthy, it’s hard to see the senior from Gilbert, Ariz., coming close to his career average of 10.6 minutes per game in 97 appearances, let alone reaching last year’s clip of 11.7 minutes per game of the 14 minutes per outing he averaged as a sophomore.

“Don’t have to decide,” Self said. “But the one thing about Mitch is it’s not fair to him not to have a great last year. Guys, he’s the best. He loves this place, he bleeds red and blue and I would love for him to have the opportunity to go out in style his way. And playing more minutes next year would probably be the case just because we have more bigs this year.”

While the option of redshirting Lightfoot could provide the player with a greater opportunity to contribute a year from now, Self said the idea also could benefit the team.

“In a perfect world, that would be great, knowing that you would have some experience returning next year,” Self said.

Because there is no drop dead date in college basketball to declare who is redshirting and who is not, the Lightfoot question could linger.

But having just gone through it with Agbaji less than a year ago, Self and company know the road ahead from here.

“I thought we did the Ochai situation perfect,” Self said with a grin. “Redshirt a guy that’s good enough to start. At least we were smart enough to figure it out.”