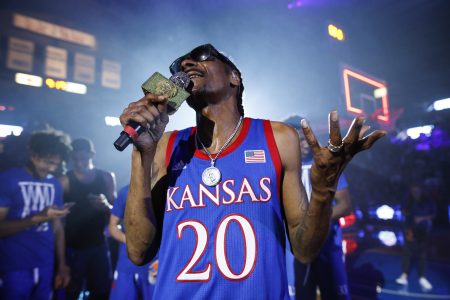 With legendary hip hop artist Snoop Dogg bringing the bulk of his tour show to Allen Fieldhouse for Late Night in the Phog on Friday, the Kansas men’s basketball program got a little more than it bargained for in terms of the props and theatrics that were included.

With dancers, a money gun and profanity all a regular part of Snoop’s set and songs, Kansas coach Bill Self was noticeably concerned about how the entertainment portion of this year’s Late Night event played out.

“I didn’t know that there was going to be anything like that,” Self said roughly 30 minutes after Late Night ended. “I was told this was radio edited and everything else. So I guess you don’t have visuals on radio. I learned that tonight.”

Snoop’s 35-minute set, which closed the event and featured several of his own hits and a sampling of others, came in front of a frenzied Allen Fieldhouse crowd, with Snoop wearing a blue No. 20 Kansas jersey and bringing energy to all four corners of the court throughout the performance.

While the majority of the crowd seemed to eat up every ounce of it, it was clear that Self and others associated with KU were caught off guard by the specifics of Snoop’s act.

“That’s not the direction that anybody at our school would want that to go at all,” Self said. “Regardless of the entertainment that it provided many, it was still not the right way to provide the entertainment.”

Added KU Athletic Director Jeff Long in a statement sent out late Friday night: “We apologize to anyone who was offended by the Snoop Dogg performance at Late Night. We made it clear to the entertainers’ managers that we expected a clean version of the show and took additional steps to communicate to our fans, including moving the artist to the final act of the evening, to ensure that no basketball activities would be missed if anyone did not want to stay for his show. I take full responsibility for not thoroughly vetting all the details of the performance and offer my personal apology to those who were offended. We strive to create a family atmosphere at Kansas and fell short of that this evening.”

While the KU men’s and women’s basketball teams danced and sang along with Snoop and his crew throughout the performance, Self caught just the beginning.

“I only stayed for a couple songs,” the KU coach said. “I wasn’t feeling well so I went back to the locker room. I didn’t see the majority of what went down, but certainly I got a pretty good idea based on the first couple of songs.”

“That’s what’s happened whenever we’ve done this,” Self said, noting that recent acts Tech N9ne, Lil Yachty and 2 Chainz did the same. “We’ve always had an opportunity to see the guys beforehand. So he did that for five minutes and then I think he went and saw the women’s team after that.”

Snoop’s portion of Late Night came after the men’s and women’s teams finished their skits and scrimmages. Putting the musical guest at the end was a new wrinkle added this year so families and other fans could still see the men scrimmage and then decide whether to stay later or not.

“It was better having the entertainer go last, format-wise,” Self said after the event.