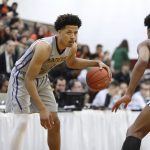 As the Kansas basketball coaching staff continues filling out its 2019 recruiting class the Jayhawks also find themselves in good standing with one of the elite prospects for the Class of 2020.

Considered one of the nation’s prime junior prospects, Cade Cunningham already has a scholarship offer from KU, and according to Rivals national basketball analyst Eric Bossi, Duke, Kentucky and North Carolina have gotten involved with his recruitment more recently.

A 6-foot-7, five-star forward, and a Montverde Academy (Fla.) teammate of 2019 KU target Precious Achiuwa, Cunningham began standing out even more of late with his play in Nike EYBL events. As Bossi pointed out, Cunningham is averaging 23.3 points, 6.5 rebounds and 5.8 assists for the Texas Titans, leading them to a 7-1 record thus far.

Cunningham told Bossi he hasn’t yet formalized a list of schools in which he’s interested, but added he plans to announce his preferences soon.

“Just seeing their plan for me is what really matters,” Cunningham told Rivals. “I don’t want to really look on what they’ve done in the past. That obviously makes sense to check it out, but I want to see what they can do for me.”

Cunningham reportedly has offers from KU, Virginia, Texas, Oklahoma State, LSU and other programs at this point.

He told Bossi one quality he is looking for in his future college basketball home is the ability to “immediately” contend for a national championship.

“That’s a big one,” Cunningham told Rivals. “Playing for a coach that is going to develop me for the next level and play me as a guard, just as a basketball player in total. A good coaching staff and then great players around me who are going to let me play my game but will also compete for a national championship.”

In an interview with Bossi for Rivals.com, Abdur-Rahim, a 6-6, four-star forward at Blair Academy (N.J.), discussed what he already has heard from some of the coaches recruiting him.

Abdur-Rahim described not only his interactions with Michigan, Georgia, Villanova and Connecticut, but also some conversations he has had with KU head coach Bill Self.

According to Abdur-Rahim, Self called him a “special” player who could fit in “great” at Kansas.

“He wants me to come down and come to a game or take an official visit during the fall,” Abdur-Rahim told Rivals. “I’ll probably plan on doing that too. He says I fit well with their system and they’ll continue to watch me play during the spring and summer.”

Abdur-Rahim shared that Michigan had recruited him “from the jump.” However, he shared that bit of information a couple of days before news broke of John Beilein leaving his head coaching position with the Wolverines to become the new head coach of the NBA’s Cleveland Cavaliers.

Jabri is the son of former NBA forward Shareef Abdur-Rahim, the No. 3 overall pick in the 1996 draft.

KU a favorite for Achiuwa and Hampton?

According to Rivals national analyst Corey Evans, KU might be the favorite in the recruitment of two of the top available prospects remaining in 2019.

Evans shared his opinion that when Memphis picked up a commitment from Rayjon Tucker, a graduate transfer from Arkansas-Little Rock, it made the program a less desirable landing spot for Achiuwa.

Per Evans, Achiuwa, a five-star prospect, primarily is considering KU, North Carolina and Memphis, and the 6-9 prep forward is expected to announce his choice on Saturday.

Meanwhile, Evans described KU as “the school to beat” in the recruitment of five-star guard R.J. Hampton, from Little Elm, Texas.