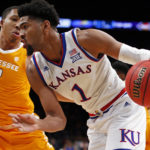 Kansas forward Dedric Lawson (1) drives to the basket past Tennessee forward Grant Williams (2) during the first half of an NCAA college basketball game in the NIT Season Tip-Off tournament Friday, Nov. 23, 2018, in New York.

On an actionless day — unless you count getting weighed and measured and posing for photos — at the NBA Draft Combine in Chicago for all of the invited prospects, the three in attendance from the University of Kansas at least learned Wednesday some more details about what’s to come.

While much of the combine for players involves drills, interviews and meeting with representatives from various NBA franchises, there will be some actual five-on-five basketball, as well.

According to Sports Illustrated’s Jeremy Woo, all three Jayhawks at the combine will take part in the scrimmage portions that will play out in front of NBA scouts, executives and coaches alike.

Woo reported on Wednesday the projected team rosters for the combine.

Although projected top picks such as Zion Williamson and Ja Morant won’t be part of that action, Dedric Lawson, Quentin Grimes and Devon Dotson will.

None of the Jayhawks will team up at the combine barring any roster changes to come. Notably, Lawson will be teammates with Iowa State’s Marial Shayok and Central Florida’s 7-foot-7 (in shoes) Tacko Fall, both of whom picked up combine invites by playing well at the G League Elite Camp earlier this week.

Dotson’s teammates will include Tennessee’s Grant Williams, while Grimes will play alongside Tennessee’s Admiral Schofield and LSU’s Tremont Waters.

None of the three KU players at the combine are projected to be first-round picks. In fact, only one of them is listed as a second-rounder in The Athletic’s most recent full 60-pick mock draft from Sam Vecenie.

The list of predictions gets through 49 picks before the lone Jayhawk, Lawson, appears on it. The Athletic’s mock draft has Indiana selecting Lawson 50th overall.

“Lawson was an All-American this season, one of the most productive players in college basketball,” Vecenie wrote. “The problem is that I’m just not sure what skill of his translates to the NBA. He was something of a low-post/high-post guy in Bill Self’s offense. He’s not a great athlete who gets a ton of separation, doesn’t shoot it, and doesn’t defend at a super high level. NBA teams are unsure if he’ll get drafted at this stage. We’ll see if that ends up being the case, but the Pacers do tend to value collegiate production in their picks.”

Any of the three KU players at the combine could theoretically still return to KU. The deadline to pull out of the draft and return to school is May 29.

Only Dotson has made it clear he entered the predraft process primarily as a way to gather information about his future in the NBA, with intentions of playing for the Jayhawks again next season unless he greatly improves his standing for this year’s draft.

At one of his recent predraft workouts Grimes spent a little time afterward to share a little bit about himself.

In a video interview with Annie Finberg for the Atlanta Hawks’ website, Grimes rattled off rapid fire answers to a number of questions.

Here are the highlights:

Best moment of your college basketball career? “First game.” (Grimes scored 21 points versus Michigan State at the Champions Classic in his KU debut.)