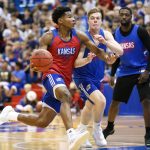 Kansas guard Ochai Agbaji (30) goes hard to the bucket against KU walk-on Michael Jankovic during a scrimmage on Tuesday, June 11, 2019 at Allen Fieldhouse.

In the weeks and months since that night, Agbaji has gone to work. On his body, on his shot, on his mind and his intangibles.

But even with all of the intensity and the razor-sharp focus that has come with his progression, the KU guard who exploded onto the scene after initially expecting to redshirt the 2018-19 season has made sure to think of others as often as he thinks of himself.

That has made Agbaji an easy candidate to become one of the 2019-20 team’s obvious leaders and also, Agbaji hopes, made life easier on the four freshmen who today are finding themselves in the same spot Agbaji was a year ago.

“Coming in last year, we had a lot of new guys, too, and we didn’t really have those guys to help us out,” Agbaji said of veteran leaders. “Looking back on that just makes me want to help them however I can. … At this level, it’s definitely something new and a lot of freshmen don’t understand how much of a different game it is. And I’m always looking forward to helping them in any way, whether it be school or anything, just getting them acclimated. Helping them’s just going to make us a better team.”

This is where the work comes in. There’s no doubt that Agbaji can help newcomers Christian Braun, Issac McBride, Tristan Enaruna and Jalen Wilson adjust to the whole college experience through his words and direction. But Agbaji’s best tool is his ability to put in the work, which he believes will set the right kind of example and inspire the younger players to follow him.

“I really want to come in with the same mindset I had when I came in last year, to help the team however I can,” Agbaji said earlier this month. “Obviously I might have a big role this season, but I’m just working toward that to make sure I’m ready for it.”

It’s that attitude and his expectation of what’s ahead that has Agbaji so focused.

As much fun as it was to become a star out of nowhere midway through the 2018-19 season, the 6-foot-5 guard from Kansas City, Mo., said it was just as painful to fade down the stretch.

After recording three 20-point games in a five-game stretch in February, Agbaji topped 10 points just twice the rest of the season, shooting just 28 of 79 (35.4%) from the floor during the Jayhawks’ final 11 games.

A nagging injury and the normal ebbs and flows of the college basketball season were largely to blame for Agbaji cooling off during the month of March. But the sophomore guard is not interested in making excuses for why his game dipped. He’d rather go to work to make sure the same trajectory does not appear during Year 2.

“Just how I hold myself, I’m always looking to get better, never settling for less, never willing to be complacent,” he said. “It was kind of hard going through that, but I’m definitely taking that as motivation for the offseason.”

The Kansas men’s basketball program on Thursday afternoon announced Friday, Oct. 4 as the date for this year’s Late Night in the Phog at Allen Fieldhouse.

This will be the 35th annual Late Night extravaganza that annually kicks off another season of Kansas basketball.

As usual, Late Night in the Phog will feature music by the KU pep band, routines from KU’s spirit squad and dance teams, skits by both basketball teams, videos from KU’s Rock Chalk Video department, coach and student-athlete introductions, scrimmages by the KU women’s and men’s teams and much more.

During the past three years, Late Night also has included a performance by a well-known rap/hip-hop artist, with Tech N9ne performing in 2016, Lil Yachty in 2017 and 2 Chainz rocking Allen Fieldhouse a year ago.

There has been no announcement about a celebrity performance for 2019, and KU officials said more details about the format of this year’s Late Night will be made public when the event gets closer.