Devon Dotson doing much more for KU’s offense than scoring 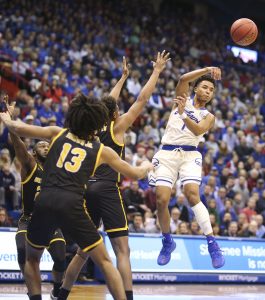 Kansas guard Devon Dotson (1) throws a pass to the wing during the first half, Tuesday, Dec. 10, 2019 at Allen Fieldhouse.

It may come as a surprise to many, including the head basketball coach at the University of Kansas, that the Jayhawks’ starting point guard currently is leading the Big 12 in scoring.

Bill Self called that development “a shocker” for him nine games into Devon Dotson’s sophomore season. But Dotson (19.8 points per game on 49.5% shooting) has done much more for KU’s offense this year than get to the hoop for layups and to the foul line for even easier points.

Coming off a career-high nine assists in KU’s victory over Milwaukee earlier this week, Dotson has proven in Year 2 to be better at setting up his teammates, too. During his freshman season, Dotson looked more like a scoring point guard than a passing one on many occasions. Over the course of 36 games, Dotson finished with five or more assists just nine times. He’s already hit that same mark five times with the Jayhawks (8-1) during the first month-plus of the schedule.

Averaging 5.0 assists an outing thus far as a sophomore, Dotson’s assist percentage has jumped in the right direction, too, compared to his freshman year. Per sports-reference.com, Dotson is assisting on 24.2% of his teammate’s field goals this year, after finishing the 2018-19 season at 19.6%.

The point guard’s distribution is one of many areas where Self has been glad to witness improvement.

“I still think that’s another step in the progression,” Self said Thursday, during his weekly press conference inside Allen Fieldhouse. “He’s got kind of a bad stat line from assists to turnovers, I think primarily because of two games.”

As Self pointed out, Dotson gave away possession six times during KU’s season-opening loss to Duke in New York, and coughed it up another six times in the Jayhawks’ overtime win versus Dayton in the Maui Invitational title game. Those rougher days as a ball handler currently have Dotson’s season assist to turnover ratio sitting at 1.7.

“So that’s a little misleading,” Self said while lauding Dotson for his improvement as a passer. “He should be a three to one guy as opposed to a one and a half to one guy. But I think he is better.”

Although there is still a lot of schedule in front of him, Dotson’s improvements as a passer have accompanied more responsibilities. He didn’t need to lead KU in scoring as a freshman, but now he’s the steadiest scorer on the roster, especially when opponents game-plan to take away Udoka Azubuike as an inside threat.

At roughly the quarter mark of his sophomore year — possibly his last one at KU, after Dotson waited until the last moment to pull his name out of the 2019 NBA Draft — the point guard’s usage percentage is up from 19.4% as a freshman to 25.5%. At the same time, his turnover percentage has dropped from 17.8% a season ago to 15.5% through nine games, while being asked to do more for his team.

Dotson has done all of this while not yet mastering the art of a pass that should result in an assist every time it’s passed.

If you’re into nitpicking, Dotson’s highlight alley-oop for Ochai Agbaji against Milwaukee might have even been off target, lower than its ideal placement — even though Agbaji reversed it for an insane finish.

Self didn’t even mention that while noting the several times Dotson and his teammates have failed to put a lob pass on the money.

“I don’t think we do that quite like our other teams have. That’s something we’ve got to improve upon,” Self said. “But I do think Dot has done a pretty good job of getting the ball where it needs to go for the most part. But he’s a better finisher than he is passer in tight right now, which is not a bad thing for us at all because we need to score.”

Fortunately for both Dotson and his teammates, he isn’t in a position where he’s the only distributor within KU’s offense. The Jayhawks are averaging 17 assists per game as a team, and Garrett (4.6) is setting teammates up almost nearly as often as Dotson.

“I think a lot of times assists are not really a true evaluation of guys passing the ball because some teams have one guy dribble and make the pass to finish every possession and some teams have it equal opportunity,” Self said.

There is no one player dominating the ball when KU runs its offense, so Self doesn’t expect Dotson to do anything ridiculous, like double up his assist numbers. But the coach doesn’t want the ever-improving point guard to be happy with where he’s at now as a passer, either.

“I think the thing to look at is still team assists on the number, and then of that number, Devon’s number should be above (5.0 per game), though,” Self said. “And it’s not quite there.”