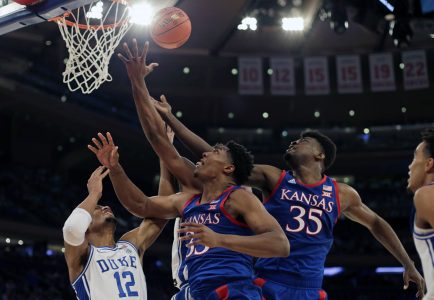 After Saturday’s 72-58 win over Colorado, Kansas coach Bill Self called out his interior players for grabbing an average of less than four rebounds apiece and not playing big at the rim.

Against a Milwaukee team that starts two post players who stand 6-foot-8 and 6-foot-7, Self is expecting to see that trend change dramatically.

But it’s not just the size advantage that Self is hoping his team can exploit. He wants to see Udoka Azubuike, David McCormack and Silvio De Sousa change their mindsets as rebounders as much as anything.

Although he did not mention him by name, Self lamented Azubuike’s passive mentality — “a half-assed effort (from) a guy about 7 foot that weighs about 260 pounds” — when shots come off the rim as something this team needs to correct.

Self then found an anecdote from the not-too-distant past to help illustrate his point.

“I remember Thomas Robinson used to want to fight a guy on a free throw miss if anybody else ever got the rebound,” Self recalled of KU’s 2011-12 All-American. “That was his way to pad his stats. And if a guard ever went in there and took his ball, he would be visibly mad. Our big guys don’t think like that. So I hope that we start doing that. That’s the thing that we need to be doing as much as anything.”

De Sousa, who was the most active of the three KU big men in the win over CU — three rebounds, two offensive — said the Jayhawks were well aware of what they needed to do on the glass moving forward.

“Being more active,” he said. “That’s one thing we’re going to have to do. And knowing the perfect time and spots to be on the court, that’s what we’ll figure out.”

Despite their limited height, the Panthers actually are averaging more rebounds per game than Kansas entering tonight’s contest, 40.3-37.8.

Watch the Milwaukee offensive end as the biggest sign of KU’s focus on the glass. Colorado grabbed 17 offensive rebounds against KU last Saturday, and four other teams have recorded at least 10 offensive boards against the Jayhawks so far this season.

KU’s transition game also has been a point of emphasis during recent weeks, with Self saying Monday that the Jayhawks would be averaging 6 more points per game (87.6 instead of 81.6) if they “were just pretty good at converting let alone being really good.”

Transition turnovers have been equal opportunity for the Jayhawks so far this season, with some of their best athletes and top ball handlers being the biggest culprits.

“We have a team of a lot of athletic guys,” De Sousa noted on Monday. “And transition should be something we’re excited about.”

So how do they get there? Self was happy to offer a few suggestions.

“I think Dot (point guard Devon Dotson) has to become a better lob passer,” he began. “That’s what we play to and we don’t throw it. I think Ochai (Agbaji) needs to attack the rim more and not be so much a passer in transition and be a finisher.

“And how many times do we throw the ball to our bigs and bad situations that hang them out to dry? I just think we’ve got to understand the game a little bit better. But those are things that are correctable.”

It should come as no surprise that Kansas, with a player like Azubuike possessing an effective field goal percentage of 79.3% so far this season, would want to give its 7-foot center as many post touches as possible during the course of any given game.

But you might be surprised at how often the Jayhawks forget to do that.

There were stretches in the win over Colorado — both with Azubuike on the court and on the bench — when the Jayhawks ran wild and simply forgot or chose not to set up in their half-court offense and play through the post.

Each time that happened, Self either called timeout to correct things or put Azubuike back into the game to make sure it would happen naturally.

Still, the emphasis appears to be an ongoing battle for this team — youth can be to blame for some of that — and the benefits of it should be more than enough to convince KU’s lineup that throwing it inside early and often is the way to go.

Per KenPom.com, KU is scoring 58.2% of its points from 2-point shots, which ranks 30th in the country. On the flip side, the Jayhawks are getting just 23% of their offense (320th nationally) from 3-point shots.

This, of course, goes against the recent trend traveled by Self’s teams, which, over the past three seasons, have averaged 32.5% of their scoring from 3-point range.

It’s not so much Milwaukee’s stellar 3-point shooting that has Self focused on guarding the arc in this one as it is the Panthers’ willingness to shoot whenever they see daylight.

Milwaukee enters this one shooting 33.3% from 3-point range in nine games, more than 3 percentage points behind KU’s average of 36.7% through eight games.

Because of KU’s desire to play two bigs for at least chunks of their games, defending perimeter shots has been a point of emphasis — and a struggle – for the Jayhawks all season.

But it takes on even greater importance in this game because of Milwaukee’s mentality and lineup.

“They play very similar to us,” Self said. “They’ve got some length to them. And all of them, at least statistically, can shoot the basketball because they all shoot 3s. Some of them haven’t shot a great percentage yet, but they’re all shooting them, so we’re going to have to defend all five spots.”

Ochai Agbaji’s 4-of-6 clip from 3-point range against Colorado improved his overall 3-point percentage to 36.6%, and the Jayhawks are going to need him to stay hot to keep the floor balanced and allow Azubuike and others the room they need to work in the paint.

Milwaukee guard DeAndre Abram is the Panthers’ top volume shooter from distance, knocking in 21 of 55 3-point attempts this season for a 38.2% clip.

According to KenPom.com’s advanced metrics, tonight’s game is one of three games remaining on KU’s 2019-20 regular season schedule in which the Jayhawks’ chances of winning are 90% or better.

That Milwaukee team was coached by current Auburn head coach Bruce Pearl, and that was Self’s second season at KU.

With the Jayhawks potentially facing a lopsided affair, look for this as a golden opportunity for Self to get some more meaningful minutes for a few reserves who are still trying to find their footing.

De Sousa is one of them, and freshmen Christian Braun and Tristan Enaruna are the others.

That trio enters this one averaging 34.6 combined minutes per game.