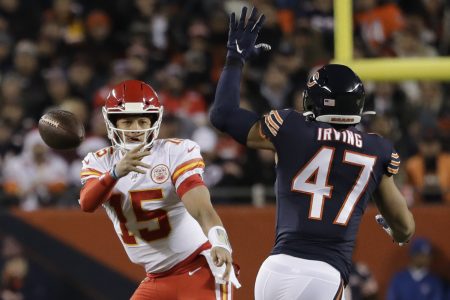 Chicago — Patrick Mahomes threw for two touchdowns and ran for another score, and the Kansas City Chiefs beat the Chicago Bears 26-3 Sunday night to stay in contention for a first-round playoff bye.

Kansas City (11-4) earned its fifth straight win and remained a game behind New England for the AFC’s second seed. The Patriots clinched their 11th consecutive AFC East championship by beating Buffalo on Saturday. The Chiefs hold the head-to-head tiebreaker over New England thanks to a victory two weeks ago that helped secure their fourth AFC West title in a row.

Mahomes also has 75 touchdown passes, making him the fastest player to hit that mark.

Travis Kelce, already the first tight end with four straight 1,000-yard seasons, became the first to reach 1,200 yards in back-to-back years. He caught eight passes for 74 yards, giving him 1,205 this year. That included a 6-yard touchdown near the end of the first half.

Harrison Butker kicked a career-best 56-yard field goal that was the fourth longest in franchise history. He also hit both the left and right uprights on a missed extra point.

The Bears (7-8) dropped their second straight after winning four of five. The Monsters of the Midway are in danger of finishing with a losing record in a season that began with Super Bowl hopes.

Mitchell Trubisky completed 18 of 34 passes for 157 yards. And Khalil Mack had a sack.

The Chiefs led 17-0 at halftime after scoring on all three possessions and racking up more than twice as many yards as the Bears (203-93).

Mahomes rolled to his left and went 12 yards untouched to the end zone, capping a 15-play drive that ate up 7 minutes, 58 seconds.

Butker nailed a 56-yard field goal early in the second quarter. And Mahomes hit Kelce for the TD in the closing minute of the half, after Chicago’s Kevin Pierre-Louis got flagged for running into punter Dustin Colquitt.

The Bears drove to the 4 in the third, but Trubisky’s fourth-down pass to Allen Robinson in the left side of the end zone got broken up by Charvarius Ward. Chicago finally scored when Eddy Piñeiro kicked a 46-yard field goal as the quarter ended.

Mahomes answered with a 14-yard touchdown to Damien Williams on the opening drive of the fourth to make it 23-3. Butker then missed the extra point when the ball somehow ricocheted off the left and right uprights.