Chiefs roll to 23-3 victory over Broncos at snowy Arrowhead 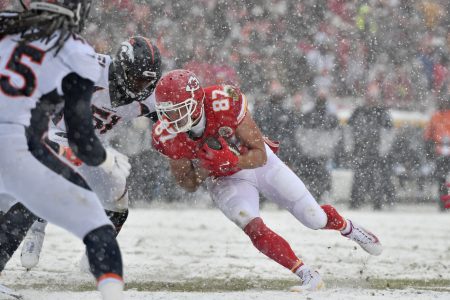 Kansas City, Mo. — Patrick Mahomes threw for 340 yards and two touchdowns, Tyreek Hill and Travis Kelce were on the receiving end of many of his biggest throws, and the AFC West champion Kansas City Chiefs romped to a 23-3 victory over the Denver Broncos at snowy Arrowhead Stadium on Sunday.

Hill caught five passes for 67 yards and both scores, and Kelce hauled in 11 catches for 142 yards to become the first tight end in NFL history with four consecutive 1,000-yard receiving seasons, helping the Chiefs (10-4) beat the Broncos for the ninth straight time. Denver (5-9) hasn’t won in Kansas City since Nov. 30, 2014.

The Chiefs outscored their longtime division rival 53-9 this season.

The Broncos were so inept offensively that Kelce had more yards receiving at the start of the fourth quarter than they had total offense (139 yards). Phillip Lindsay was bottled up on the ground, and former Missouri standout Drew Lock — who grew up in Lee’s Summit — struggled not only with the conditions but a suddenly stout Chiefs defense.

The rookie quarterback was 18 of 40 for 208 yards and an egregious interception in the end zone.

The Broncos finished with 251 yards and were just 5 of 14 on third down and 1 of 3 on fourth. They also were penalized seven times for 72 yards and failed to score on both of their trips inside the red zone.

Flurries began to fall overnight, far earlier than meteorologists had predicted, and the intensifying snow caused major problems for people trying to get to the stadium. That included Kansas City running back LeSean McCoy and wide receiver Sammy Watkins, both of whom were delayed by the crawling traffic in getting to pregame warmups.

An hour before kickoff, dozens of workers were clearing off the yard lines, end zones and sidelines as the snow swirled inside the stadium. It really began to pick up again at halftime, obscuring Kauffman Stadium about a quarter mile away, and stadium workers flooded the field to clear what they could during every timeout.

It wasn’t long until Andy Williams’ sonorous voice over the loudspeakers made the snowglobe atmosphere complete.

And for the Chiefs, it seemed indeed like the most wonderful time of the year.

They effortlessly marched downfield for a touchdown on their opening drive and then got a trio of field goals from Harrison Butker on their next three first-half possessions to build a 12-3 lead. When the Chiefs received the kickoff to start the second half, Mahomes took them right down field again, finding Hill for their second TD connection of the game.

The Broncos didn’t force a punt until there was about six minutes left in the third quarter.

By that point, the game was pretty much over.

The biggest cheers the rest of the way were for the Cincinnati Bengals, who were trying to knock off the New England Patriots. They couldn’t hold an early lead, though, and that left the Chiefs needing to win out and the Patriots to drop one of their final two games to move ahead of them for the No. 2 seed and a first-round playoff bye.

Chiefs: DE Alex Okafor hurt his chest while sacking Lock in the first half and did not return. … RB Damien Williams (ribs) and CBs Morris Claiborne (shoulder) and Rashad Fenton (hamstring) were inactive.

Denver begins a season-ending two-game homestand against Detroit next Sunday.