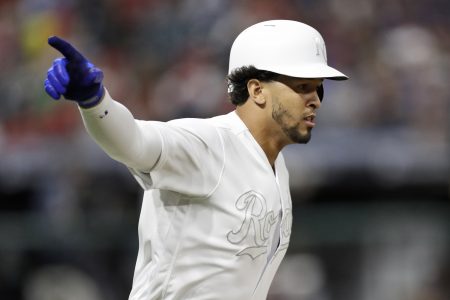 Kansas City Royals' Cheslor Cuthbert reacts after hitting a double during the sixth inning of the team's baseball game against the Cleveland Indians, Saturday, Aug. 24, 2019, in Cleveland. (AP Photo/Tony Dejak)

Cleveland — Franmil Reyes hit a three-run homer to help Cleveland beat the Kansas City Royals 4-2 on Saturday night in a game in which the Indians lost third baseman José Ramírez to a right wrist injury.

Reyes’ 30th homer of the season highlighted a four-run third inning against the Royals’ Glenn Sparkman (3-9). Reyes has three homers since being acquired from San Diego on July 31.

With the win, Cleveland moved ahead of Tampa Bay into one of the two AL wild-card spots.

Ramírez, a two-time All-Star, left the game in the first inning after fouling off a pitch. He immediately bent over in pain before walking off the field with a trainer. A team spokesman said he exited with “right wrist discomfort.”

Mike Clevinger (9-2) struck out eight and allowed one run over 5 2/3 innings, remaining unbeaten in his career against Kansas City and improving to 4-0 at home this season. The right-hander is 9-0 with a 1.93 ERA in 14 appearances against the Royals.

Brad Hand worked a scoreless ninth for his 31st save. It was his second conversion in two nights following three straight blown saves.

Mike Freeman, who replaced Ramírez, had two hits and drove in Oscar Mercado to open the scoring in front of the second sellout of the season at Progressive Field.

The Royals pulled within 4-1 in the fourth when Meibrys Viloria doubled home Cheslor Cuthbert. A fielder’s choice by Jorge Soler scored Humberto Arteaga in the seventh.

Cuthbert doubled in the sixth to end a 0-for-40 slump. His previous hit was a two-run homer on Aug. 8 at Detroit.

Sparkman allowed four runs in 4 1/3 innings, extending his winless streak to seven starts. The right-hander has faced Cleveland four times this season, going 0-3 with a 9.15 ERA.

In the third, umpire Ed Hickox was struck squarely on the top of his mask by a wild pitch thrown by Sparkman but remained behind the plate.

Indians RHP Corey Kluber will have his strained oblique re-examined Tuesday, but manager Terry Francona declined to offer a timetable for his return. The two-time AL Cy Young Award winner has been on the injured list since May 2 with a broken forearm and suffered the abdominal strain in an Aug. 18 rehab start for Triple-A Columbus.

Royals: LHP Danny Duffy (left hamstring strain) will make one rehab start today for Double-A Northwest Arkansas before rejoining Kansas City’s rotation. “It’s just to get his feet back under him in a competitive situation,” manager Ned Yost said.

Indians: OF Bradley Zimmer (right shoulder surgery), who has been on the injured list since March, shifts his rehab assignment to Triple-A Columbus on Monday. The younger brother of Royals RHP Kyle Zimmer played in four games for Double-A Akron.

Royals: LHP Eric Skoglund makes his first appearance in the majors since Sept. 30, 2018. He went 2-4 with a 6.14 ERA in 11 starts for Triple-A Omaha after being suspended for the first 80 games of the season for a violation of the MLB drug policy.

Indians: RHP Shane Bieber (12-6, 3.26 ERA) has lost consecutive starts for the first time this season, allowing two earned runs in six innings against both the Red Sox and Mets. The All-Star Game MVP is 3-0 in four career starts against the Royals.