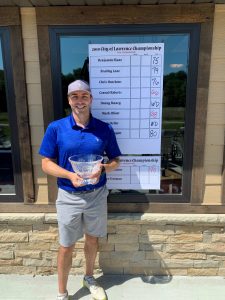 Former University of Kansas golfer Conrad Roberts poses with the trophy on Sunday, Aug. 18, 2019, after winning the 2019 City of Lawrence Championship. Roberts now has won eight city golf titles since 2006.

There have been harder tournaments and more grueling challenges, but former University of Kansas golfer Conrad Roberts is back on top.

Roberts won Sunday’s City of Lawrence Championship by firing a 6-under par 66 at Eagle Bend to hold off Mark Elliott (68) and Tyler Cummins (70) in an event that was shortened to just one round because of heavy rain throughout the weekend.

Roberts, an eight-time city champ, won the crown five times in a row from 2006-10 before being unable to play in 2011 because of a scheduling conflict. He won again in 2012 and most recently in 2014 before hoisting the trophy in the nine-man championship flight again on Sunday.

“I play in this event whenever I can,” Roberts said. “It’s always a lot of fun and I was really hoping it was going to be 36 holes because in a one-day shootout anything can happen. But when it’s down to one day, you just have to go out and win the day and I was able to do that.”

Roberts said he had no idea how Elliott or Cummins were playing until the end, which kept his focus not on outdoing them but rather on trying to play his best on every hole and every shot.

“Sometimes that’s a good thing,” he said. “Sometimes, when you know what you’ve got to shoot, that’s harder. When I got to 18 and had an 8-to-10-foot putt for birdie, I knew if I made that I’d have a good chance to win.”

He did, for his third birdie on the back side, and finished with a two-stroke cushion.

In other tourney action Sunday, Maurice Monteau (78) won the 12-man men’s regular flight by a stroke over Ryne Jackson (79) and Bob Bezek, who shot a 1-under 71, and won the men’s senior championship flight by two strokes over Bud Stagg (73).

Just four women entered this year’s event and Jettie Bezek’s 88 was enough to hold off her three competitors to win the title in the women’s championship flight. She outlasted Janelle Martin by two strokes, while Margaret Birmingham (95) and Cynthia Smith (99) rounded out the women’s field.

In all, 42 players entered this year’s City of Lawrence Championship, with four breaking par and 14 shooting 80 or better.