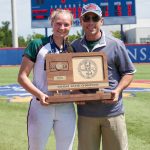 Free State ace Tatum Clopton, left, and her father, Aaron Clopton, hoist the 2019 Class 6A state champions trophy together after the Firebirds' 1-0 victory over Washburn Rural on Saturday, May 25, 2019, at Arrocha Ballpark.

With his daughter Tatum dominating on the mound, Aaron Clopton took in this year’s Class 6A state softball tournament from a drastically different vantage point than he saw Free State’s triumph in 2018 — from the Arrocha Ballpark bleachers.

But this year, one season after leading Free State to their first ever state softball title in similar fashion, Tatum and her teammates were able to repeat the feat over the weekend, knocking off previously unbeaten Washburn Rural, 1-0, in the title game on Saturday, with Aaron taking a front-row seat for all the fun.

“Luckily, an Internet connection exists (overseas),” Aaron said Saturday in the middle of celebrating Free State’s victory. “So I was able to watch last year. You have to find certain spots to do it, but you’re able to cobble together Internet feeds.”

Following most of those 2018 games in the early-morning hours overseas, Aaron said he still got into the games just as much as if he had been in Lawrence.

A former assistant softball coach at KU in the early 2000s and Tatum’s summer coach for the past few years, Aaron said being 6,000 miles away from the action had one small advantage that he could not benefit from this past weekend.

“It was far less stressful last year,” he said. “Watching it through the Internet or Facebook or Game Tracker, if it gets stressful I can just put it down and walk away. Out here, hearing it, seeing it and breathing it, it’s not easy.”

Neither is getting the whole crew there for the entire Clopton family.

This year, it was Tatum’s mother, Sarah, who was forced to miss some of the action. Earlier in the week, Tatum’s grandfather suffered a heart attack in Little Rock, Ark., and Sarah spent most of the week, including Thursday’s quarterfinal win over Olathe Northwest and the semifinal and first three innings of the title game on Friday, with her father in an Arkansas hospital.

“I got here right when they postponed it (Friday night),” Sarah said. “So I would’ve seen the end. But it was like such a role reversal. Aaron was here and I wasn’t. Last year, I was the one calling him. And this year I was calling for updates.”

Like her husband, Sarah found following the action from a distance to be much easier on her heart and central nervous system.

“I think being in the hospital with my dad was less stressful than being here,” Sarah said after watching her daughter strikeout eight and allow just three hits in the title game. “I struggle to watch and enjoy it, but she’s such a fighter and I have so much fun watching her play.”

Having them both there for Saturday’s day-late finale was the perfect ending to another memorable season for Tatum, who has committed to play softball at Oklahoma State but also plans to make a couple more runs at adding to her prep legacy before leaving Lawrence.

“It’s always amazing having him at my games,” Tatum said of her father. “He’s my biggest fan and he’s been with me since Day 1 pitching, even though sometimes he didn’t want to be. He knew if I kept going and kept working hard I’d be something great before I even knew that. So having him here was so amazing and is something I’ll always remember.”

For the past two years, Rea has had her father, Free State assistant coach Chad Rea, in the dugout for every single pitch, there to support her and celebrate during the ups and downs of each season.

“It’s such a blessing having him in the dugout and looking back knowing that he’s always there for me,” Rea said. “I would never want it any other way, and can’t imagine what it felt like for Tatum to look up in the stands and not see her dad there last year. But coming back and taking it two times and him being able to see this one has to make it 10 times more fun and sweet and memorable.”

The win was nice. The celebration was better. But for Aaron, who said his sacrifice and contribution to our nation’s armed forces was “just a sliver of what it’s all about.

“We have an amazing country and that shows in that so many people are willing to leave families and jobs to go do it,” he added of his service.

Back in the U.S. just six weeks, it was the chance to watch Tatum battle, win or lose, that meant the most to him.

“She loves beating hitters, no matter what,” Aaron said with a smile. “If they were in the backyard, whoever’s coming over, playing for state or nothing, she wants to beat you. She loves competing every single at bat and I will always be most proud of that. I love that about her.”

Added Tatum: “He’s always with me in the circle, in my head when I’m pitching. It’s always hard with him gone and last year was super difficult. But this year, having him here, I think makes it even cooler.”

With Aaron back and expecting to be “home for a while,” the two already have talked about how things might go a year from now if the Firebirds position themselves to make a run at three in a row.

“As long as they’re here, I’ll be here,” Aaron said of the state tournament. “It’s a heck of a way to kick off the summer. They should get in the habit of this.”