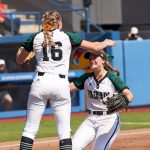 Free State sophomores Sara Roszak (23) and Tatum Clopton (16) celebrate Roszak's diving catch that ended the sixth inning of a 1-0 win over Washburn Rural and set the stage for the Firebirds' second consecutive Class 6A state title on Saturday, May 25, 2019, at Arrocha Ballpark.

The celebration came Saturday. And it included chants of “Back-to-Back” and approximately 35 million hugs and smiles.

For the second year in a row, the Free State High softball team was the one standing in the middle of the field at Arrocha Ballpark, hoisting the hardware that read, “State Champions.”

The Firebirds (23-2) achieved the feat with a 1-0 victory over previously unbeaten Washburn Rural in the title game.

Back in April, Rural (23-1), which certainly made things tough on the Firebirds during Saturday’s four-inning completion of the weather-delayed contest, was one of just two teams to beat the Firebirds this season. And getting revenge while collecting another trophy merely served as an extra dose of sweetness for a season-long goal achieved.

“It feels a-mazing,” sophomore shortstop Sara Roszak said with a glow after Saturday’s victory. “This is so much fun. I mean, this season has been so much fun. Last season was so much fun. This team is so special and I’m just so happy I can share this with everybody.”

While the one run, which the Firebirds picked up in the second inning on Friday after, appropriately, back-to-back hits from seniors Lauryn Jones and Emma Stanwix, was necessary to secure the victory. It was Free State’s defense — throughout the state tournament — that won the Firebirds the title.

Behind 30 strikeouts from ace pitcher Tatum Clopton and a handful of solid, if not spectacular defensive plays from the defense behind her, the Firebirds refused to give up a single run in three games at state and only allowed two batters to reach third base in 21 innings.

“You play for one run and then play defense,” Free State coach Lee Ice said. “You’ve got to pitch, play defense and get the timely hit. And, throughout the state tournament, that’s what we got. The unbelievable plays all across. We had backhand plays by (freshman second baseman) Macy (Miles), we had the diving catch, we had the bunt defense from Lauryn and then the pitching, of course. That’s what it takes to win state championships.”

After picking up the game in the bottom of the fourth inning to open play on Saturday, Clopton and the Firebirds found immediate trouble. A base hit and two walks loaded the bases and gave Washburn Rural an early opportunity to completely flip the momentum. But it never happened. Instead, Clopton coerced an easy ground ball to third, where Jones grabbed the roller and stepped on the bag to end the inning.

“I knew we’d get out of it,” Clopton said. “I trust my teammates behind me and I know they are going to do everything possible to lay their hearts on the field this game and they did exactly that.”

With two outs in the bottom of the sixth inning, Roszak’s diving grab near the foul line behind third base was the unofficial game winner.

Although the Firebirds still had to bat in the top of the seventh and Washburn Rural put two runners on base in their last stand, Roszak’s ability to deliver what could only be described as the defensive play of the season, all but sealed the victory.

“When she came up with it, I think that was the loudest that I’ve ever heard,” Clopton said. “It was amazing. After that, the momentum just going into everything was wild.”

Said Roszak, still smiling: “I just saw that ball and I was like, ‘That’s something I can get into my glove.’ And I just went for it, lunged for it as hard as I could and it ended up working out. When I got up, I saw Lauryn Jones’ face and I was just like, ‘Wow. That just happened.’ You could hear it, you could feel it and it was an energy-changer.”

Added sophomore first baseman Georgia Rea, who finished 7-for-10 at state, with two extra base hits: “There was no doubt in my mind she was going to make that play. A part of me was like, ‘Yep, that’s going to be it.’ But it always comes down to that last inning.”

That it did, and that’s where a little misfortune earlier in the season actually paid off for the Firebirds.

In the first meeting with Washburn Rural, a 5-2 loss on April 19, WRHS ace and junior leadoff hitter Kasey Hamilton, who has committed to KU, ripped a three-run home run three pitches after the Firebirds decided to pitch to her instead of intentionally walking her.

Saturday, with first base open and a runner on second, Ice elected to walk Hamilton and take his chances with No. 2 hitter Jenna Moore.

“There was no doubt what I was going to do because that’s what hurt us (when we played them the first time),” Ice said. “Nobody said a word. They all agreed let’s get the next one.”

Clopton did exactly that, fanning Moore on a high fastball that set off a wild celebration down the first base line and in the packed stands above the Free State dugout.

“Those two pitchers are probably the two best pitchers in the state of Kansas,” Ice said. “One’s committed to KU (Hamilton) and one to Oklahoma State (Clopton). Those are D-I players. There were a lot of D-I players out here today. But we’ve got some big time players who have been here before. And as I told the young girls as they came to the plate to get their medals, ‘We’re making this a habit. Let’s get back here next year.'”

Two down, two to go. That’s the mentality for arguably the greatest softball class Lawrence has ever seen. And even though the still-young girls on the squad emphasized that they wanted to win this one for the seniors, those who played and those who didn’t — Chloe Taylor, Taylor Burks, Karsen Jacobson, Annie Roszak, Morgan Leslie, Jones and Stanwix — their goal is to add another a year from now, no matter how they have to do it.

“Last year, we were the underdogs and kind of came up and showed people what we’ve got,” Roszak said. “This year, there was more pressure and we definitely had a target on our backs, but we just kept it tight, knew what we had to do and we did it.”

Added Ice: “It’s amazing. I look at my phone and see how many people have already text me, ‘3-peat.’ Let’s just enjoy this one before we even think about that.”