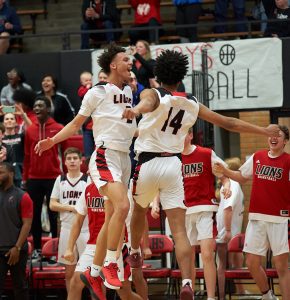 Even with a promising season cut short with a 72-66 loss to Blue Valley North in the first round of the Class 6A state tournament, Lawrence High head coach Mike Lewis made sure the Lions didn’t lose sight of all they’d accomplished.

“As coaches we just remind them (after that game) how proud we are of them,” Lewis told the Journal-World in a phone interview. “We remind them of the importance of the journey they’ve been on — the highs and the lows. And how important that is to them, not only now but in the future.”

What was also important to mention for Lewis was the life lessons taught during this season. Learning how to handle adversity, never quitting on yourself or your teammates and what it takes to be both a student and an athlete to name a few.

“You have good days and you have bad days, and how you handle adversity and successes of your life, I think those lessons are taught in high school athletics and for sure just the ability to compete,” Lewis said. “You’re going to keep fighting, and that’s probably the best life lesson right there.”

And LHS showed that fight all season, finishing 18-5 — highlighted by a 12-game win streak — and secured a share of the Sunflower League title with Olathe West and Free State.

“I’m just really proud of our overall effort and our overall finish to our season,” Lewis said. “I just thought the guys showed steady progress from where we were in November to the (12-game winning streak). (I just) really look back at a lot of positives.”

The Lions also had strong showings in midseason tournaments, winning the Topeka Invitational Tournament and finishing runners-up in the Blue Valley Shootout.

Lewis said playing two or three games in a row helps to make a team battle tested for league play and eventually the state tournament.

“The variety of teams that we get to play in the Blue Valley Shootout and Topeka Invitational Tournament is really good for our group,” Lewis said. “Each year we get to see opponents that are outside of our league, and it’s just a great experience to be able to play different opponents.”

Being battle tested is something Lewis and LHS pride themselves on. Lewis said during his 11 years coaching, he’s made it a point to have a tough regular-season schedule.

“We do that just to prepare our guys for the best,” Lewis said. “Some years it works out that you can have a winning record and have a lot of success, and then there’s years where you get beat up.”

And with six straight trips to the state tournament — along with back-to-back Sunflower League titles — that bet has paid off.

That also plays into finding the identity of this team, which was key for the Lions all season. Lewis pointed to finding out “who we are” and being able to play as a cohesive unit.

Which was led by a group of seniors — guards Peyton Mallory, Willie Dotson, Valdez White, Ethan Bentzinger and Ruben Littlehead and forwards Bryce Johnson and Mayson Quartlebaum — who played significant minutes this season.

“I’ve been lucky, and we’ve been lucky as a coaching staff, that we’ve had some really, really good groups of seniors,” Lewis said. “But this particular group is not only big in number, but they’re also just a real quality group on and off the floor.”

While that entire group contributed to the Lions’ success, Quartlebaum and junior guard Zeke Mayo were standouts. Mayo averaged 16 points, six rebounds and four assists per game and was named to the All-Sunflower League first team. Quartlebaum, a Kennesaw State signee, was named to the second team.

Lewis said that’s a testament to how coachable the duo is. Mayo was asked to play more inside this season, while Quartlebaum was asked to stretch the floor and hit perimeter shots.

“Being able to play inside and out — you can take their label as a forward or guard off and just say, ‘Hey, they were good basketball players,'” Lewis said.

But Lewis has always pointed back to the team, never one or two individual players. He’s proud of the culture built and how both him and the players are learning together. That comes from Lewis’ assistant coaches, team managers and a supportive LHS administration.

Through those small moments, Lewis hopes what sticks with his team is how close they became over the course of this year.

“That’s a bond and a camaraderie that we’ve built in our program where our guys do trust each other and they trust the coaches that are around them,” Lewis said. “It is a true family that we try to develop in our program.”