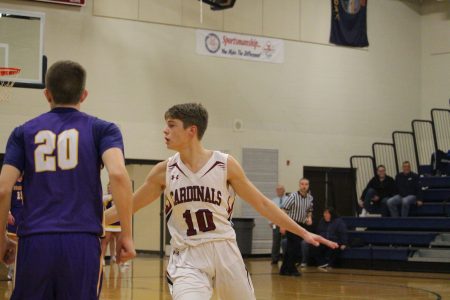 Eudora senior Noah Watkins (10) defends a player during a basketball game for the Cardinals. Watkins set a single-season record and a career record for most charges taken in program history.

Eudora senior Noah Watkins etched his name into the record books more than once to close out his career on the hardwood. He set the single-season record for charges taken in his final campaign with 21, while also setting the career record for drawn charges with 36.

And for four days, that last number actually stood as a state record.

Last Monday, the Kansas Sports Hall of Fame tweeted out that Watkins was a state-record holder for career charges taken. EHS head coach Kyle Deterding congratulated him via a text message, marking a perfect ending to a successful stint with the boys basketball program.

“It means the world to be able to do that for my team,” Watkins said. “I was just so happy, I don’t really know how to explain it. It was like, ‘Wow, I’m in the record books for something that means so much to me.'”

With charges being a new category, though, that particular milestone was short-lived. The Kansas Sports Hall of Fame tweeted out four days later that Garret Dalinghaus of Frankfort had the record with 50 charges taken in his career, and three days after that tweeted out that Benjamin Wichman of Blue Valley has the record with 70.

But that doesn’t take away from what Watkins accomplished in his time with the Cardinals, and what it took to even have his name in Eudora’s record books in the first place.

Watkins, who is 6-foot-1, doesn’t have much of a vertical and he isn’t known for blocking shots. He still prides himself on being a good defender, which puts him in the right place at the right time. Most of all, his unselfish attitude allows him to put his body on the line on a frequent basis.

“It’s just part of his DNA,” Deterding said. “He’s smart enough to be in the right spot at times, and he’s tough enough to let guys run over him.”

For Watkins, that type of mindset has been instilled in him ever since he first picked up the sport. His dad, Ryan Watkins, was his first coach and taught him the fundamentals at an early age. Ryan Watkins eventually served as an assistant for EHS and got a front-row seat to his son making history.

Noah Watkins has been dedicated to basketball for as long as he can remember. He played football and was going to be a member of the boys golf team before the spring sports season was canceled. But basketball has always been his favorite sport.

With encouragement from his father, Noah Watkins started taking charges in the eighth grade when he had a little more size. Even back then, Watkins understood the importance of forcing a key turnover by putting his body in front of an opposing player who was driving to the rim.

“My dad has always been harping on me to do it,” Watkins said. “I feel like everyone knows how to do it. Being able to lay yourself on the line and sacrifice for your team is not something everybody has. That’s something I take pride in.”

Watkins took his first charge at the varsity level as a sophomore, and it came late in a game that had basically been decided by that point. He then had a bigger role as a junior, which led to him taking 14 charges for the Cardinals.

It was sometime after his junior season that Watkins discovered how close he came to the season record. So he came back determined to break Austin Downing’s single-season record of 19 charges this past winter.

The countdown was on after that, and Deterding continued to post updates via social media throughout Eudora’s 10-12 season. Watkins even took five charges in a single game against Tonganoxie.

Watkins’ record-breaking charge came in the sub-state opener against Girard and his final charge came during a crucial moment of the game against Parsons in the sub-state championship. Both warranted huge reactions from the EHS bench while Watkins was picked up off the floor by his teammates.

“My team was going crazy; my team has always been cheering me on to get them,” Watkins said. “They have been keeping up with me the whole time. Being able to be picked up by some of my best friends was just an amazing feeling. It was just awesome.”

Watkins always got up safely to his feet after trying to take a charge throughout his career. There were also plenty of times that the charges didn’t go in his favor. In the end, though, he put himself in the right position enough and was rewarded for doing so.

Now Watkins will turn his attention to a post-basketball life. He plans to attend Johnson County Community College and eventually pursue a degree in dental hygiene. The Cardinals plan to honor him for what he accomplished at their team banquet, and his name will likely remain in the record books for quite some time. 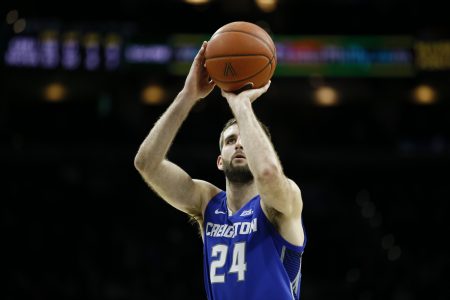