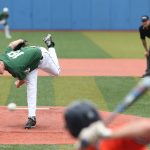 Free State starting pitcher Ethan Bradford delivers to the plate during the sixth inning against Olathe East on Thursday, May 23, 2019 at Hoglund Ballpark.

Nebraska freshman pitcher Ethan Bradford was sitting alone in his room when he found out that the 2020 season was no more due to the threat of coronavirus.

About two hours earlier, Nebraska’s road series with Wichita State had been canceled just before the team was about to get on the bus. But Bradford, who graduated from Free State a year ago, fully expected to play baseball again at some point this spring.

That was until he received a message from his coach about how the 2020 season had been canceled for all spring sports programs at the Division I level.

“I was shocked; I didn’t think it would go that extreme,” Bradford said. “It really sucks. It was hard to take in.”

Just like that, though, Bradford’s freshman campaign was over before it ever really started.

Bradford, who was the Class 6A pitcher of the year during Free State’s eventual runner-up finish in the state tournament last year, appeared in two games at the collegiate level this spring. He threw 17 pitches against Arizona State on Feb. 29, giving up two runs on one hit in his debut.

Bradford was less nervous in his second outing, spinning two scoreless innings with four strikeouts against Northern Colorado on March 11. Bradford, a 6-foot-3 lefty, threw a total of 48 pitches between the two games.

The Cornhuskers, who had won three games in a row, finished the year with a 7-8 clip. The cancellation leaves a sour taste in Bradford’s mouth given how much work went into gearing up for this year.

Nebraska’s baseball team had 6 a.m. weights and conditioning on a daily basis from the moment players stepped on campus.

“That was basically all for nothing because the season is over,” Bradford said. “We have been together for eight months, and now we can’t play together.”

Bradford isn’t alone, however. Plenty of former area players missed out on what could have been at the collegiate level in 2020. Many of them are in different stages of their respective careers as well. Here is a look at a few of those specific situations: 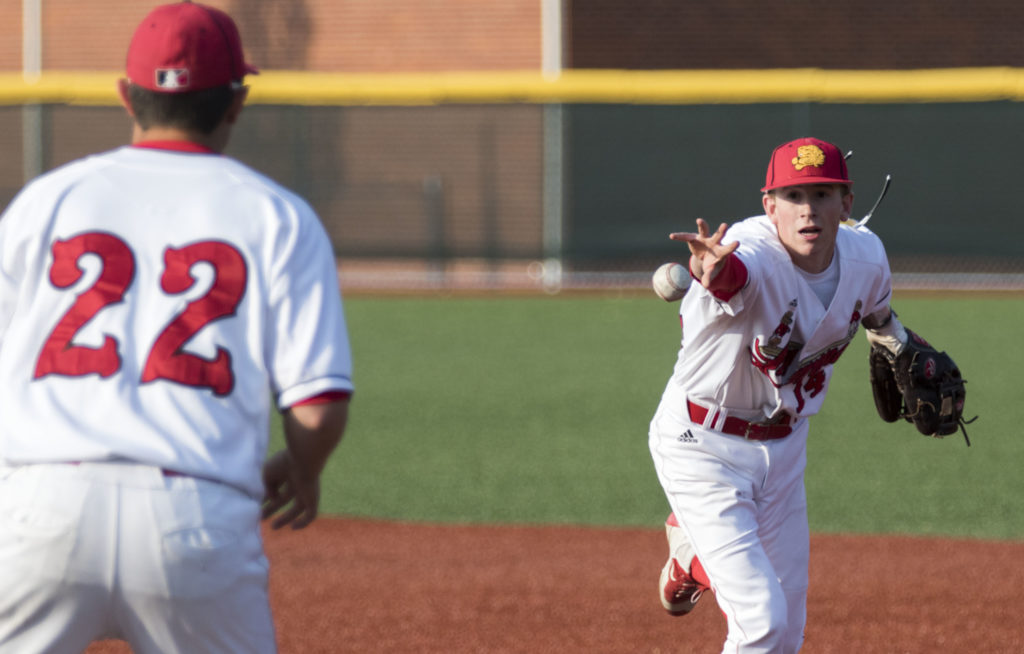 Lawrence High’s Andrew Stewart tosses the ball to first baseman Devin Lauts (22) for an out during the Lions’ game against Olathe North Thursday afternoon at LHS on May 6, 2016.

The former Lawrence High standout was in the middle of his sophomore campaign at Barton Community College when the season was called off. The Cougars were 19-3 through 22 games, and having one of their better seasons in quite some time.

“They considered us one of the best Barton teams to come through there,” Stewart said. “We were all banking on a year of success and getting all these other guys recruited. So everyone was pretty bummed about it.”

Stewart, a 5-foot-11, 160-pound shortstop, was especially disappointed for his fellow sophomores who missed out on an opportunity to get seen by other collegiate squads. Fortunately for Stewart, he had already planned to continue his baseball career at Wichita State University after this year.

Yet that is what makes Stewart’s decision so tough in the coming months. With plenty of rosters in limbo across the college baseball landscape, Stewart has to decide if he should return for another year at Barton or join WSU next season.

Stewart said that he hopes to finalize his plans by the summer, since he has multiple factors to consider to put himself in the best position possible.

“I have to talk to my family and to see what is the best option for me,” Stewart said. “If they do an extra year of eligibility, I get three years at Wichita State. If I want to stay at Barton Community College, I get a chance to be with the kids that I have played with for the last two years, and finish something that we have good going.”

Stewart was posting a .352 batting average in 88 at-bats during his second collegiate campaign. He had 28 RBIs to go along with 11 doubles and three homers. In his two seasons at Barton, Stewart hit .328 with 67 RBIs and 26 total doubles in 305 at-bats. 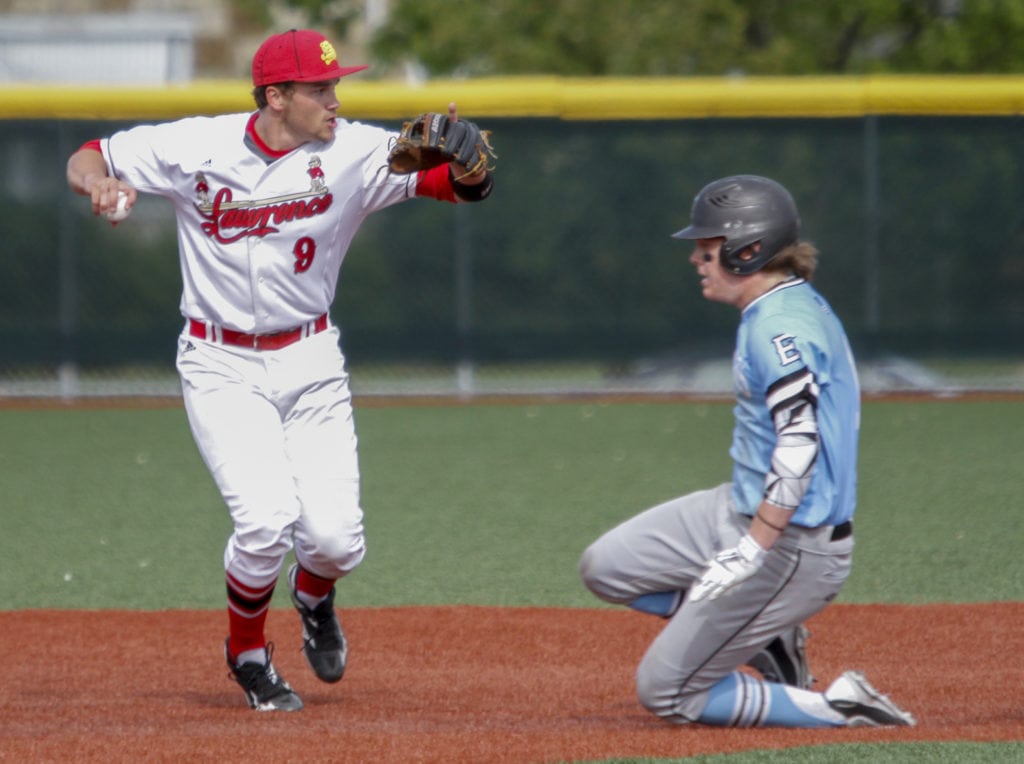 Brad Kincaid gets another crack at senior year

There is a chance that Kincaid would have had another season regardless, but now he gets to go out on his own terms with his teammates at McNeese State University.

Kincaid, a 6-foot, 205-pound right-handed pitcher from Lawrence High, fractured his elbow earlier in the year. Kincaid only appeared in two games, and was expected to be on the shelf until the postseason at the earliest. It marked the first injury of his college career.

“To me, it was definitely a more difficult situation two weeks ago when I found out I wasn’t going to be able to play because of my arm,” Kincaid said. “Now that everyone is in the same position — all the seniors at least — it makes it a lot easier for us as a unit to decide whether or not it is worth coming back.”

Kincaid thought that most of the seniors were leaning toward coming back, though it is a decision that looms for all spring sports athletes at every level. McNeese was 10-7 on the year before the 2020 season was canceled.

Now, Kincaid can close out an impressive collegiate career the right way. Kincaid was a walk-on during his first year at Johnson County Community College. He played two seasons there and ranked second in strikeouts with 156. His 12 career wins is tied for 18th all-time, and his 119 2/3 career innings pitched are the 15th-most in team history.

In his first season at McNeese, Kincaid appeared in 21 games and made six starts last year. He struck out 42 batters in 44 1/3 innings, while posting a 3-1 clip and a 4.06 ERA. He was being considered to serve as the team’s closer before his injury.

“I feel like I’ve had a very successful college career,” Kincaid said. “I’m just excited that we are even getting an option to come back to finish out playing a dream.” 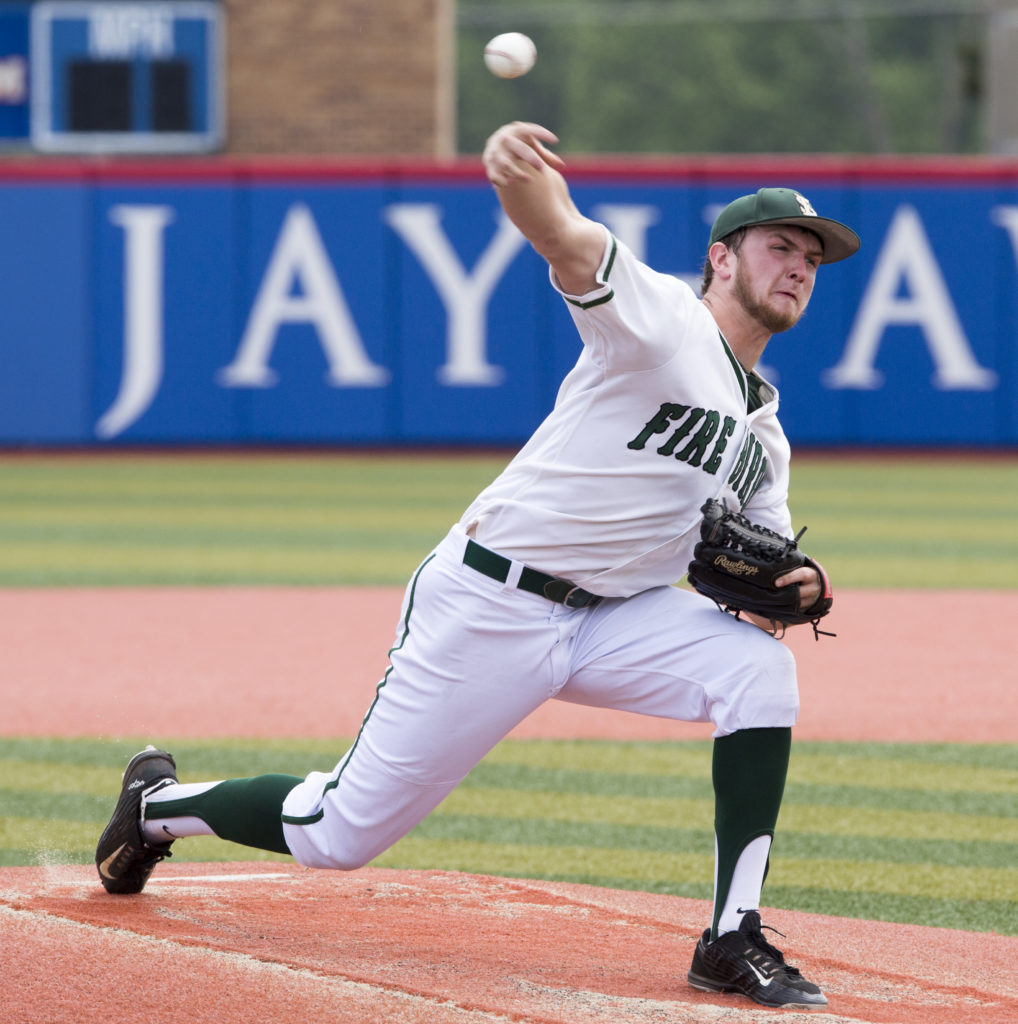 Free State senior Hunter Gudde pitched a complete game shutout against Derby in a five-inning victory at Hoglund Ballpark at Kansas University in the first round of the Class 6A state tournament on June 19, 2016.

It has been quite the journey for Baker pitcher Hunter Gudde.

Gudde, a 6-foot-2, 200-pound right-hander, graduated from Free State in 2016 and went to play baseball at the University of Kansas. After redshirting his freshman season, Gudde had to have Tommy John surgery twice because the first one didn’t work correctly.

Gudde eventually transferred to Baker, where he finally got to play last season. He helped the Wildcats win their conference tournament last year, and was starting to hit his stride this season before it was canceled.

In his last outing, which took place during Baker’s final doubleheader of the season on March 8, Gudde hit as high as 91 miles per hour on the radar gun. He allowed six hits over seven scoreless innings, whiffing four batters and walking none.

“I was throwing a lot of fastball, which I haven’t been doing as much,” Gudde said. “I was just feeling it and I could locate my fastball. I’d mix in a breaking ball every once in a while and doing that more often will help me for sure.”

Had Gudde continued to pitch like that, perhaps a pro scout could have been in attendance for a Baker game by the end of the year. Instead, Gudde is choosing to get right back to work with all this free time.

Gudde will continue to work with Noah Briley this spring. Briley, who is a former Baker pitcher that dealt with injuries throughout his career, is now a pitching instructor for an indoor baseball training facility known as The Edge.

Briley helped Gudde increase his velocity by changing his mechanics this past offseason, which was on display this year. Gudde made five starts for the Wildcats this season, posting a 2-1 record and a 3.76 ERA. He struck out 25 batters and walked five in 26 1/3 innings of work.

“For me, the ultimate goal is for our team to win a national championship or a conference championship,” Gudde said. “I try not to be satisfied with myself because there is always something I can do better.”