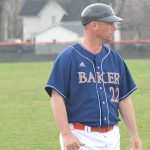 Baker head coach Ryan Goodwin coaching his team during the 2019 season, when the Wildcats won the conference tournament as the eighth seed.

The season hadn’t gone as well as Baker baseball coach Ryan Goodwin would have liked, but he believes his team was just about to hit its stride before the threat of coronavirus cut the 2020 campaign short.

Baker finished the year at 7-16, but was also coming off a sweep of Grand View University on March 8. With just over a month left in the regular season, the Wildcats had plenty of time to turn things around.

That was until the NAIA announced on Monday that the 2020 season had been canceled for all spring sports programs in an attempt to contain the threat of COVID-19.

“I could see we were a team that was about to really pop off and make a run,” Goodwin said. “Not being able to do that sucks. It would have been nice to see where this ride would have taken us eventually. But sometimes there are just things that are out of your control.”

The Wildcats would know better than anyone how much momentum impacts their play on the baseball diamond. Last season, Baker won five games in six days by a combined score of 51-13 to win the Heart of America Athletic Conference’s postseason tournament as the eighth seed.

With roles becoming more clear this season, Baker appeared to be on the verge of playing its best baseball of the year. At least that was the case in the road sweep of Grand View University, when Baker earned a 2-0 win and a 5-2 victory to end a nine-game skid.

In the 2-0 win, sophomore starter Hunter Gudde had his best outing of the year. The former Free State Firebird gave up six hits over seven scoreless innings, while striking out four batters and walking none. He touched as high as 91 miles per hour on the radar gun, according to Goodwin.

“If he did that for another outing or two, maybe by the end of the regular season, we are able to get a scout out (there),” Goodwin said.

Senior Bailey Pattin, who is from Perry-Lecompton, tallied a three-hit performance in Baker’s 5-2 win over the nightcap. Seniors Brian Wircenske and Martin Radosevic each posted three hits in what would be the final game of the season as well.

“That was probably the best we have played all year honestly,” Goodwin said of the final doubleheader. “I think we were pretty close to really turning the season around.”

At the same time, though, Goodwin is well aware that all of this is much bigger than what Baker baseball might have accomplished this spring. It is why Baker’s administration originally suspended competition through April 5 before the NCAA Tournament was even canceled.

“Our most-important priority right now is making sure this affects the least amount of lives as possible,” Goodwin said. “If we don’t all work together as Americans to curb this, this could get really out of hand.”

Given baseball is a sport about being in rhythm, the lost season especially hurts players that were having good years. Wircenske was posting a .370 batting average with nine RBI in 22 games.

Freshman Hank Dobson, who graduated from Lawrence High a year ago, was earning more playing time as of late. Dobson had a .333 batting average in 13 games (six starts) at the plate, while also striking out nine batters in 8 2/3 innings on the mound.

“He’s developed faster as a hitter than I thought he would,” Goodwin said. “When you stop right now in the middle of the season, you lose what he’s building on. You hope that doesn’t go away.”

The NAIA has made it clear that no spring sport student-athletes will be charged a season of competition, so Dobson will have a chance to redo his freshman campaign next year. And many seniors will have the opportunity to go out on their own terms, if they choose to do so.

Wircenske, Pattin, Radosevic, Aaron Foster, Cody Rowe, Dillon Prokop, Kendall Fritzel, Ryker Johnson, Kyle Klomfahs, Peyton Kahle, Aaron Bonilla and Brandon Gomer could all come back for another shot at their senior year. But some of them already have jobs or post-college plans lined up, including Prokop who has been accepted into KU’s medical program.

But that’s what makes Goodwin’s job so difficult in the coming months. This will impact roster construction for all spring sports programs at every level, especially with freshman classes still coming in and potential transfers looking for better roles for the 2021 season.

“It is going to be very interesting to see how it all plays out,” Goodwin said. “There is nothing in the coaching handbook to prepare you for how to handle this.” 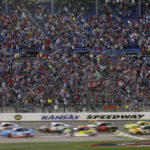