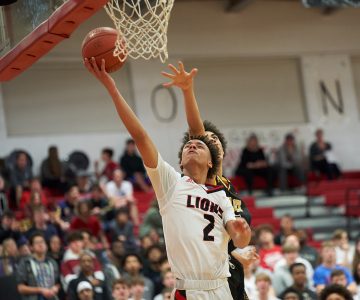 A pair of city standouts made the first team to highlight the All-Sunflower League accolades for the 2019-20 season.

Lawrence High junior Zeke Mayo and Free State senior DK Middleton were both named to the first on the All-Sunflower League boys squad. Both players helped their respective teams clinch a share of the Sunflower League crown along with Olathe West.

Mayo, a 6-foot-3 guard, averaged 16.0 points per game to go along 6.0 rebounds and 4.0 assists per contest for the Lions. He helped Lawrence reach the state tournament for the sixth year in a row, which matched a program record for most consecutive state berths.

“Zeke (is) no doubt a first-team caliber player,” LHS head coach Mike Lewis said. “(He was) our most well-rounded player, made his teammates better, and is very coachable.”

Middleton, meanwhile, was a key part of the Firebirds notching their third straight trip to the state tourney. He averaged 10.0 points per outing, while also posting 5.0 rebounds and 2.0 assists per game.

“DK had a really good career,” FSHS head coach Sam Stroh said. “There were other players in the league who maybe had better stats, but DK earned the respect of the league coaches in the way he helped us win the league this year.”

LHS senior Mayson Quartlebaum, a Kennesaw State signee, was the only local athlete to be listed on the second team. FSHS sophomore point guard Mozae Downing-Rivers received a third-team selection.

In addition, Lawrence seniors Peyton Mallory and Bryce Johnson were named to the honorable mention team. Free State Olin Yoder also received an honorable-mention selection, which was a list that included 21 athletes in the league.

On the girls side, a trio of local players were put on the All-Sunflower League second team. Junior Shannon Clarke and senior Caely Kesten, a Northwest Missouri State signee, both made it for the Firebirds. LHS junior Ozi Ajekwu was also one of 12 second-team selections.

Olathe West’s Rick Rhoades was named Coach of the Year, while Lele Love of Olathe North earned Player of the Year.