‘We are a winning school’: LHS boys basketball headed to state for program-record sixth year in a row 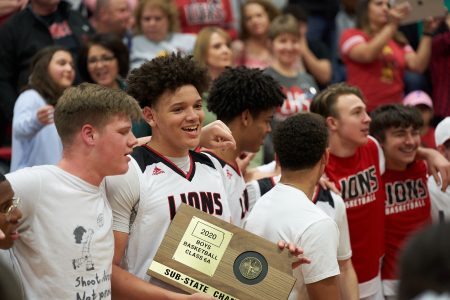 With its sub-state title victory last weekend, Lawrence High’s boys basketball team tied a record that the program set almost a century ago: six straight appearances at the state tournament.

The current streak started in 2015, and the only other time LHS had a run like this was when it earned a trip to state every year between 1916 and 1922. Fifth-seeded Lawrence’s 2020 tourney run begins Thursday against No. 4 Blue Valley North.

You can be sure the Lions appreciate the significance of the historic milestone. After LHS won sub-state, seniors Peyton Mallory, Willie Dotson, Valdez White, Ethan Bentzinger, Bryce Johnson, Mayson Quartlebaum and Ruben Littlehead honored the streak by posing for a photo with six fingers raised.

“It’s really expected of us,” Johnson said. “We are a winning school.”

But the streak goes beyond just those seniors, of course. In fact, two members of LHS’ current roster have older brothers who played a part in the streak. Trey Quartlebaum, who graduated in 2019, was on four state qualifying teams before playing collegiate basketball at St. Francis Brooklyn. And Jackson Mallory, who now plays for Ottawa University, was on three teams that went to the state tournament.

“The last time they (didn’t go) was my brother’s freshman year,” Peyton Mallory said. “Besides that, it has been a great stretch. We want to protect it.”

In order to keep the streak alive, however, this year’s group had to go through some growing pains. After returning just one starter from last year’s team, the Lions dropped three of their first six games of the 2019-20 season.

But now, entering the postseason, Lawrence has discovered a rotation that works. Junior Zeke Mayo joins Mallory, Johnson, Quartlebaum and Littlehead in the starting five, and White, Dotson and Bentzinger provide valuable minutes off the bench.

With its rotation straightened out, LHS has won 15 of its last 16 games, which includes netting a share of the Sunflower League crown and hoisting another sub-state championship plaque in the final home game of the year.

Now, after losing to Wichita Southeast in the opening round in last year’s state tournament, the goal is to play on Saturday — and perhaps win the program’s first state title since 1995.

“We are trying to win state,” White said. “We just have to focus on this next game, take one game at a time.”

Lawrence is set to tip off against Blue Valley North at 8:15 p.m. Thursday at Wichita State University.