Preps notebook: How 5 area basketball teams made it to the state tourney and a look at their path to state title

Lawerence High senior Peyton Mallory (3) goes up for a layup during a game against Wichita Southeast Saturday night at LHS on March 7, 2020.

Five area teams are headed to their respective state tournament during the final week of the winter sports season.

All five squads actually entered the year with the expectation of playing in the final event of the season after qualifying for the state tourney a year ago. Lawrence High’s boys basketball team (18-4) has made six straight trips to the Class 6A state tournament, while Free State (17-5) is going for the fourth year in a row.

In Class 4A girls, Baldwin (17-5) is headed to Salina for the third season in a row. Eudora (20-2) is making its second consecutive trip. Bishop Seabury (21-2), meanwhile, has now advanced to the Class 2A state boys basketball tournament in back-to-back years.

This should be an exciting week of postseason basketball for all area teams. Before it gets started, though, let’s take a closer look at each of those five squads and figure out how they got here and what is their path to a state title:

Number of state tourney appearances: 40 (six in a row)

The Lions have been dynamic on offense all year, but their defensive play was the key to winning their sub-state bracket. Against Wichita South and Wichita Southeast, Lawrence turned to the zone defense to take control of both games. It most notably held Wichita Southeast’s Jackie Johnson to just 30 points after he scored 25 in the first two quarters.

Lawrence’s ability to win in a multitude of ways should bode well for the final week of the season. This is also an experienced group led by seniors Peyton Mallory, Bryce Johnson, Mayson Quartlebaum, Ruben Littlehead, Valdez White, Ethan Bentzinger and Willie Dotson. Junior guard Zeke Mayo is perhaps the best player in the area, and he has the ability to score off the dribble and get hot from deep.

The Lions, who have won 15 of their last 17 games, will have to get through Blue Valley North in the opening round. Blue Valley North was ranked No. 3 in Class 6A in the final poll on Feb. 25, which was one spot above LHS. The winner will face the winner of Haysville-Campus and Manhattan in the semifinals on Friday. 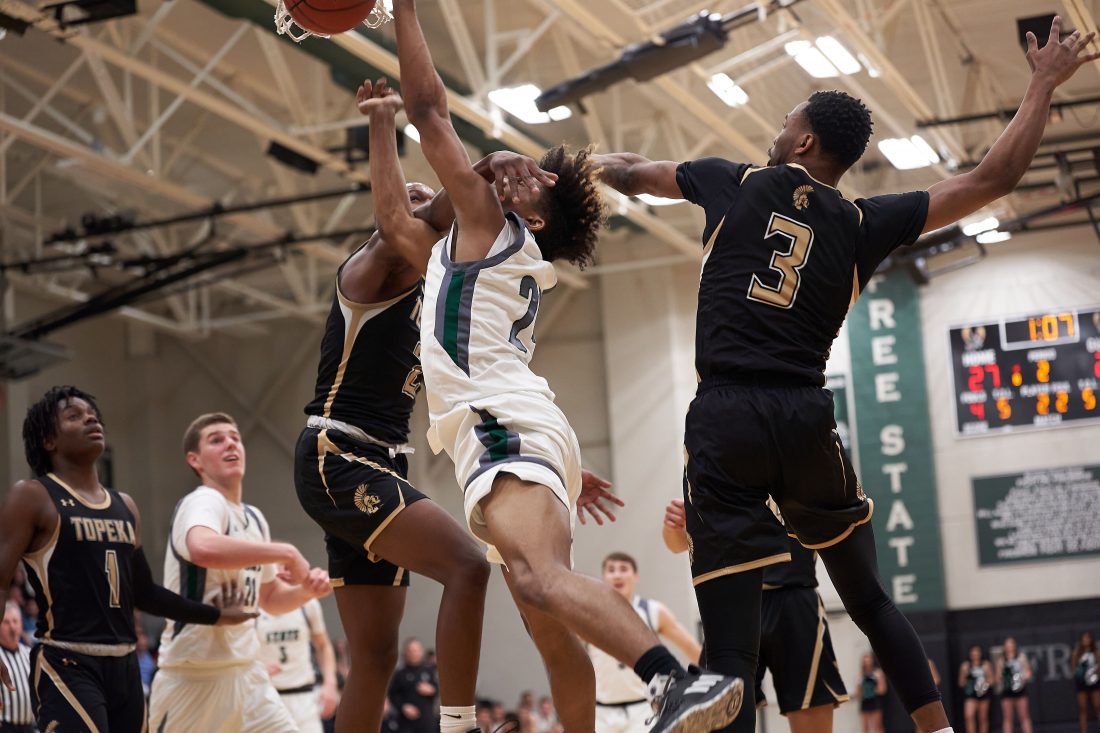 Free State sophomore forward Dash Hawkins (24) is fouled as he goes up for a layup. Free State defeated Topeka High 58-48 on Saturday, March 7.

Number of state tourney appearances: 9 (four in a row)

Stingy defense and composure have been key to Free State’s run as of late. The Firebirds have won eight of their previous nine games, with their lone loss coming at the hands of the Lions in the only edition of the City Showdown in the regular season.

Free State head coach Sam Stroh has constantly proved he can get the most out of his players, earning four trips to the state tourney in his five years at the helm. This year’s team is deep and experienced, with senior DK Middleton leading the charge on both ends of the floor. Mozae Downing-Rivers, Ethan Lincoln, Olin Yoder, Andrew Piper, Miles Branch and Kris Daniels all have major roles for FSHS.

The opening-round tilt won’t be the easiest for the Firebirds. Blue Valley Northwest, which has won the last three state titles, is Free State’s first-round foe. FSHS fell to Blue Valley Northwest in the state championship game in 2018. This season, the Huskies are ranked No. 2 in the latest poll by the Kansas Basketball Coaches Association.

Number of state tourney appearances: 4 (two in a row)

Eudora’s girls basketball team is going back to the state tournament after being eliminated in the opening round a year ago. Seniors Riley Hiebert and Reagan Hiebert have shouldered much of the leadership responsibility this year. Harper Schreiner has made strides in her sophomore campaign.

At one point, EHS won 16 games in a row during the regular season. Eudora’s only two losses of the season came against Kansas City Piper. If the Cardinals defeat Clay Center in the opening round, they could face Piper in the semifinals on Friday. Piper has claimed both meetings with EHS by a combined 19 points.

Number of state tourney appearances: 14 (three in a row)

Making the state tournament has essentially become an annual tradition for the Bulldogs, who actually had to replace some key seniors from last year’s team. Baldwin senior Josie Boyle is the only Bulldog averaging in double figures this year with an average of 11.6 points per game. Sophomore Riley Smith and senior Anna Burnett have also been critical to Baldwin’s success this year.

BHS will have to face last year’s Class 4A runner-up, Kansas City Piper, in the first round of the state tournament at Tony’s Pizza Events Center in Salina. Piper has won 15 consecutive games since dropping a 44-39 decision to McPherson on Jan. 4. Piper defeated Baldwin by a 61-31 margin on Feb. 19.

Number of state tourney appearances: 5 (two in a row)

After being ranked No. 1 in Class 2A all year, Bishop Seabury’s boys basketball team is headed back to the Class 2A state tournament. The Seahawks haven’t lost since falling to Louisburg in the third-place game of the Baldwin Invitational on Jan. 25. Since then, Bishop Seabury has won 14 straight contests.

Bishop Seabury is capable of scoring in bunches, led by explosive playmakers Zach Bloch, Stavian Jones and Cobe Green on the perimeter. Joao Carlos Ramirez and Luke Hornberger also give opposing teams problems with their length in the frontcourt. After falling in the first round in the state tournament last season, BSA will face Garden Plain to begin this year’s state tourney.