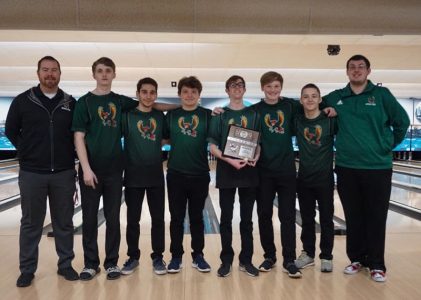 Free State's varsity boys bowling team with its runner-up plaque at the regional meet in Junction City. The Firebirds are headed to the Class 6A state tournament, which takes place on Thursday at Northrock Lanes in Wichita.

In their journey to the state tournament this season, Free State’s boys bowlers have consistently stepped up for one another, and senior Joey Taylor knows that as well as anyone.

Because of a schedule conflict with the state choir, Taylor wasn’t able to help out his friends in the regional bowling meet. But Porter Neidow, Warren Williams, AJ Baker, John Hamer, Ryan Neff and Mike Tennyson all did their part to help the Firebirds to a runner-up finish — and a berth at state, which is scheduled for Thursday at Northrock Lanes in Wichita.

Taylor, whose dad was sending him updates from the regional meet the whole time, was ecstatic that he would have one more chance to bowl with his friends.

“This is the last one,” Taylor said. “A lot of times … we have gone as a team. So I’m happy about that. It was really important for me to go as a team.”

Teamwork has been the theme of Free State’s season. Whenever a player has had an off day or even missed a meet entirely, plenty of other bowlers have been there to rise to the occasion.

“I think this team really feeds off each other’s energy,” Neidow said. “This team is really connected, and we like bowling with each other.”

Those connections go deeper than just being part of the same team, though. The Free State bowlers said they hang out outside of bowling practices and meets, as well.

“We are all friends just hanging out,” Neidow said. “Me being a senior, I wanted to start actually hanging out with these guys. Start spending time with them while I can. This team is really fun to play with, and I love them all.”

The Firebirds’ chemistry has been especially helpful during Baker format games, where multiple bowlers contribute to a single game.

And Baker games could make a difference in the nine-team competition at the state meet. Derby, Garden City, Haysville-Campus, Junction City, Olathe East, Olathe Northwest, Shawnee Mission Northwest and Wichita Heights are all in the varsity boys division.

With most of the top squads close in average points, FSHS might need a strong showing in the Baker format to earn a better place than last year’s sixth-place finish.

Three area bowlers are slated to compete in the final meet of the season as individuals.

Lawrence High senior Emilie Rodman is back after placing 50th in her first trip to state last season. Rodman has posted an average game score of 187, rolling a series high of 626 at one point this year.

Rodman has won seven of her 11 meets this season. She has finished as a runner-up on two occasions, as well.

“I’m just living in the moment right now,” Rodman said. “This is my last bowling (meet), so I’m just trying to be here in the moment rather than think about what is happening.”

Free State sophomore Ashley Edwinson has earned her first trip to the state meet with a consistent performance this year. She’s registered an average game score of 163 and a high of 244. Edwinson’s highest series score this year is 577.

“I just need to follow through and be consistent,” Edwinson said. “It’s been my best year. I’ve been more consistent and followed through quite a bit.”

Lawrence freshman Maison Albarado is also headed to the biggest meet of the season, a mere six months after he first picked up the sport. Albarado recorded an average game score of 185 this year. His highest series score, a 658, came during the regional meet.

“It is kind of a big deal for me to have this opportunity,” Albarado said. “I just try to keep my nerves down and stay excited.”

The Class 6A state bowling meet is set for Thursday at Northrock Lanes in Wichita. The boys will begin play at 8:50 a.m., and the girls are slated to start at 1:40 p.m.