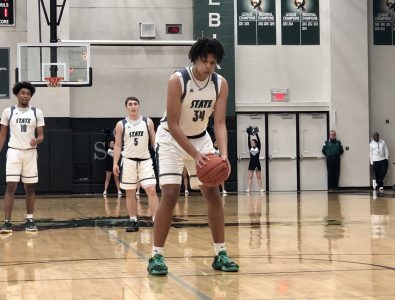 Free State junior Miles Branch prepares to shoot a free throw in Wednesday’s sub-state semifinal against Junction City at FSHS. The Firebirds advanced with a 68-56 win on March 4, 2020.

Free State’s boys basketball team overcame a mid-game slump to earn a 68-56 win over No. 12 seed Junction City in the Class 6A sub-state semifinals on Wednesday.

Playing on their home court, the 4th-seeded Firebirds saw a 15-point first-quarter lead turn into a one-point halftime deficit. But the message in the halftime discussion was clear: Relax and get back to playing Free State basketball.

“I think everybody was pretty calm just knowing our best was ahead,” Free State sophomore Mozae Downing-Rivers said.

That proved to be correct, as Free State outscored Junction City by 13 in the second half.

The victory sets up a showdown with No. 5 seed Topeka High (16-5) Saturday in the sub-state championship.

“We didn’t handle the press very well in the second quarter,” Free State coach Sam Stroh said. “But I was proud of the way we responded out of halftime.

“We have to play better if we want to win and advance to the state tournament on Saturday.”

The Firebirds (16-5) imposed their will early in the contest, and at times it looked like they might run the Blue Jays (8-13) out of the gym as they jumped out to a 19-6 lead in the opening quarter. Andrew Piper, who led Free State with 14 points, scored 6 of those in the first period.

“My teammates were finding me, and I was finding good angles,” Piper said.

But the game flipped in a hurry in the second quarter when Downing-Rivers got in foul trouble and had to head to the bench. Junction City outscored Free State 24-10 in the period and forced four turnovers. Three of those led to layups for the Blue Jays in the final minutes of the half, and Junction City took a 30-29 halftime lead.

Sophomore Howard Johnson scored 12 of his team-high 17 points in the quarter for Junction City.

“It hurt having Mozae out,” Stroh said of the sophomore’s foul trouble. “I don’t think we’ve been rattled as much when he’s out of the game as the year has gone on, but I haven’t seen that from our guys in a long time. I get it; nervousness sets in at sub-state. It’s win or go home.”

Seniors Ethan Lincoln and Olin Yoder were in no mood to go home, either, as they combined to hit back-to-back 3-pointers to give the Firebirds a 35-32 lead. Free State played from the driver’s seat for the remainder of the game, thanks in large part to six points and an attacking mentality from Downing-Rivers in the third quarter.

“We knew if we came out and got up 10 or 12, the game would go a lot smoother in the fourth quarter,” Downing-Rivers said. “I knew we were going to regroup at halftime.”

The Free State sophomore finished with nine points and helped extend the Firebirds’ lead to 50-42 through three quarters. The Firebirds shot a red-hot 65% from the field and 55% from beyond the arc and kept the Blue Jays at arm’s length in the final quarter.

“It’s like a quarterback,” Stroh said of Downing-Rivers. “It helps when he’s in the game to run the offense and defense.”

Free State will host Topeka High at 6 p.m. Saturday with a trip to the Class 6A state tournament on the line.