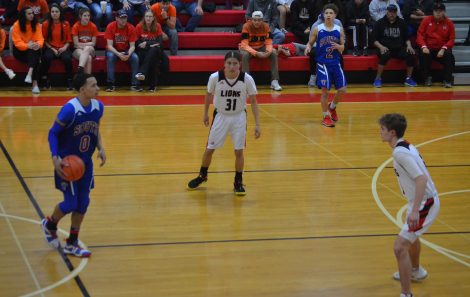 Lawrence High seniors Ruben Littlehead (31) and Peyton Mallory (3) guard the ball during a game against Wichita South on Wednesday at LHS on March 4, 2020.

At halftime of Wednesday’s sub-state opener, Lawrence High’s coaching staff elected to try a tactic it hadn’t used all year — a decision that helped the LHS boys advance to the sub-state title game.

After clinging to a 1-point lead at the intermission, LHS tried a 2-3 zone defense against Wichita South in the second half. The defensive switch stymied the Titans, and the Lions pulled away with a 63-41 win Wednesday night at LHS.

Lawrence (17-4, No. 4 in Class 6A) is now one win away from advancing to the Class 6A state tournament for the sixth year in a row.

“It worked to our advantage tonight,” LHS head coach Mike Lewis said about switching to the zone. “We knew Wichita South had the strength of getting to the rim and making athletic shots. I wanted to see what they would do against it and see how they could score from the outside.”

The Lions typically employ a man-to-man defense, which usually works with their athleticism across the floor. Wichita South (7-14) was able to get junior guard Zeke Mayo in early foul trouble, however, forcing LHS to go back to the drawing board.

After that, the LHS players responded well to the decision to switch up their defensive game plan.

“A lot of times we don’t have to pull it out in games because we are playing good man-to-man defense,” Mayo said. “Tonight, it was protection for myself with three fouls, and we did a good job adjusting.”

The Titans were held to 8 of 23 from the floor in the second half. They made just three baskets during a 7-point showing in the third quarter. Wichita South connected on just one attempt from beyond the arc all night.

As a result, Lawrence led by double digits for the final 12 minutes of the game.

“We don’t play zone a lot,” senior Ruben Littlehead said. “We got together and just kind of clogged that middle. We played off each other on help side and weak side, and we were able to isolate that middle.”

The zone defense also allowed the Lions to get out in transition, and the floodgates opened when that got the hosts several good looks. LHS went on a 15-0 run between the 7:16 mark and the 3:50 mark of the third period.

During that stretch, senior guard Peyton Mallory got hot, burying three 3-pointers. He hit two from the corner, one of which came off an assist by Mayo. Mallory’s third triple came off his own steal.

Littlehead also recorded a pair of buckets in transition off steals during that decisive run.

“That (run) brought our team up a lot, and we kept that lead pretty much the whole time,” Littlehead said. “That really hyped our team up until the end.”

Plenty of players ended up contributing in Lawrence’s latest win. With Mayo picking up three fouls in the first quarter, senior Valdez White was one of the key producers off the bench and finished with 10 points. Littlehead and senior Mayson Quartlebaum each had 11 points.

Mallory paced the Lions with 13 points on 4-of-11 shooting from the floor. Senior Bryce Johnson added 7 points, which included the game’s only dunk in the fourth quarter. Senior Willie Dotson also connected on a 3-pointer during that 20-point outburst in the third period.

Lawrence will now host Wichita Southeast in the sub-state title game at 6 p.m. Saturday. The Golden Buffaloes eliminated the Lions in the opening round of the Class 6A state tournament last season.