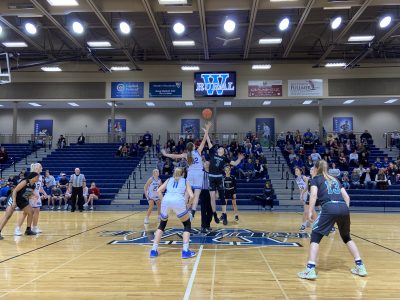 Topeka — Despite a strong start from beyond the arc and a late push, Free State came up short in the second half as the Firebirds fell to Washburn Rural 66-57 in the sub-state semifinals Tuesday.

The Firebirds finish the season 8-13 in head coach Nick Wood’s first season at the helm.

“They were fun to watch tonight,” Wood said. “We didn’t lose because of lack of effort or heart. We gave them everything they could handle.”

It wasn’t surprising Free State got a difficult draw in its first sub-state game with the Firebirds being the No. 11 seed. Going up against defending Class 6A state champion Washburn Rural (16-5, No. 7 Class 6A) to begin postseason play made things even more difficult.

“The mindset (coming in) was we knew we were going to come in and face a really good opponent,” Wood said. “At the same time, we knew we could come down here and compete and do our best to win a basketball game.”

Despite the loss, there were certainly positive takeaways in the Firebirds’ final game of the season, with junior forward Shannon Clarke leading the way with 22 points. Fellow junior guard Evy Harrell was right behind with 15 points.

“They were awesome,” Wood said. “And they’re going to really have to do that next year (as seniors). They’ve got to really step up that way.”

Free State also started strong with its outside shooting, finishing 9-for-22 from 3-point range.

“We made some shots in the first half that kept us in it,” Wood said. “But what they were doing defensively was they were really sagging and protecting the lane. So what we decided was CK and Shannon (should) go make plays for others.”

Shots just weren’t falling inside, whether it was floaters, layups or pretty much anything in the arc. However, Harrell, Clarke and senior guard Joy Nunoo all connected from deep, which helped give Free State an early 10-9 lead at the end of the first quarter.

The Firebirds’ defense was also strong, forcing a few turnovers early. But when Free State missed shots inside, it led to plenty of transition opportunities for Washburn Rural.

Freshman guard Brooklyn DeLeye was especially dangerous in transition, leading the Junior Blues with 11 points in the first half. DeLeye finished with a team-high 26 points.

“Part of the way we want to play defensively is we want to get that thing going up and down,” Wood said. “The risk of that sometimes is it allows their players to get out in space and make plays. And to their credit, they did.”

But Washburn Rural took a 17-16 lead midway through the second quarter, and that’s when the Junior Blues took control. Washburn Rural went on an 8-3 run to end the half, and a late triple from Harrell helped salvage the half for Free State.

Shooting-wise, Free State finally broke through with a layup from junior forward Daeci Jaillite-Walker at the 6:40 mark of the third quarter. Shortly after, Clarke followed with a layup of her own.

Although Free State cut the lead to 30-25, Washburn Rural continued to find answers on the other end. The Junior Blues stretched it out to a 13-point lead in the third quarter, led by sophomore guard Emma Krueger with 11 points in the third quarter.

Free State regained some life in the fourth quarter as senior guard and floor general Caely Kesten hit her first shot of the game. The Firebirds also cut the lead to seven thanks to a couple capitalizing on a handful of Washburn Rural turnovers.

Even into the final two minutes, the Firebirds kept hanging around with the lead back in single digits. Clarke even cut the lead to 63-57 as she knocked down a three with 19.9 seconds left.

“Being able to push (at the end of games) is one of our strengths and we emphasize it a lot,” Kesten said. “When we weren’t doing that, it was like, ‘What are we doing? Let’s get back to (being) ourselves.'”

But while the fourth quarter push pressured Washburn Rural — and the Firebirds were forced to foul, with Kesten and Nunoo fouling out late — the Junior Blues never wavered enough to surrender the lead.

Led by Kesten and Nunoo, Wood said he’s going to miss this “special group” of seniors.

“Coming in as my first season, I couldn’t have asked for a better senior class to help provide leadership on and off the basketball court,” Wood said. “They made my job a lot easier because every day they showed up and did things the right way.

I told them in the locker room, what they did for this basketball program will continue to be felt for next year and years on after that.”

For Kesten, she said she learned plenty about herself and her teammates during her senior season, whether it was volunteering off the court or motivating and pushing on it.

“It’s always bigger basketball and (these players) are bigger than teammates,” Kesten said. “These guys are always going to be known as friends and teammates, but more as friends.”

Wood has preached all season that he’s ok with any outcome, as long as the Firebirds never give up and “compete our hearts out and support one another.” He said they’ll take some time to reflect on the season, but the grind to prepare for next year is already right around the corner.

“We’ve got a lot of work to continue to do,” Wood said. “I think our girls are understanding what it takes to get out there and compete on a nightly basis. So we need to take a deep breath and reflect on the season — myself and the players included — and get back in the gym this summer and work.”