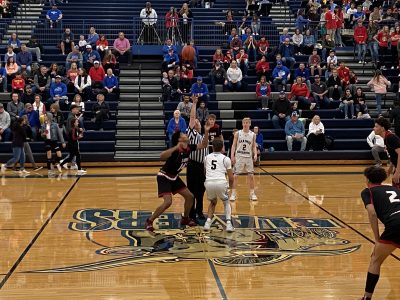 “Tonight we had good energy,” LHS coach Mike Lewis said. “It was just a great Friday night atmosphere, and I thought our guys played well.”

Confidence is often contagious in basketball, especially when a team wastes no time settling into a groove. And on Friday night as Mayo pulled up for and made a 3-pointer 5 feet behind the line, the Lions (9-3, 3-2 Sunflower League) had plenty of it.

Lewis was especially impressed with the veteran leadership from Mayo and Mallory as the duo were able to set the tone early.

“They just created a vibe for our team that was just something that everybody else could follow,” Lewis said. “(That’s) what Peyton and Zeke should do for us.”

The Lions wanted to score early and often, jumping out to an 13-3 lead in the first quarter. Mayo, Mallory and senior guard Ethan Bentzinger all hit 3-pointers and LHS was in firm control on both ends of the floor.

LHS finished 9-of-29 from 3-point range on the night with so many open looks against the Blazers’ zone defense.

Gardner Edgerton (5-7, 2-2 Sunflower League) turned the ball over seven times in the first quarter, leading to numerous transition opportunities for LHS. And with impressive ball movement and shot selection in half-court sets, it wasn’t much of a surprise to see LHS out front 18-6 at the end of the first quarter.

LHS cooled off from beyond in the arc in the second quarter, but still carried plenty of momentum to take a 29-14 lead going into halftime.

The Blazers put up a fight after the break, though, cutting the lead to 38-25 midway through the third quarter. However, LHS responded with 3-pointers from Mayo and senior guard Willie Dotson to calm things down.

While the lead wasn’t necessarily in danger, Lewis said that’s a “maturity thing” when players go for the highlight play instead of staying the course.

“We talk to our guys about being able to put the hammer down,” Lewis said. “Good teams put (opponents) away. They don’t get goofy and make silly, immature plays. And that’s sometimes easier said than done when you have a nice lead and you feel like things are going your way.”

Lewis also said his team could improve by being more physical rebounders and not allowing as many open lanes to the rim.

Nonetheless, the Lions’ defense still looked strong as they led 44-27 at the end of the third quarter.

If anything, the fourth quarter served as punctuation — or more specifically an exclamation point — for the Lions.

Midway through the quarter, senior forward Bryce Johnson stole the ball and finished with an emphatic dunk. Less than a minute later, Mallory got a layup and free throw off an inbounds play to give the Lions their largest lead of the night (59-35).

The Lions continued to add to the lead in the closing minutes, even allowing for reserves to get some minutes, including a late layup from sophomore forward Pearse Long.

Lewis, preferring not to talk about his team’s win streak, expressed his appreciation for how his team is really “starting to trust each other” on the court.

“They’re not real vocal and you don’t see (the confidence) on the outside,” Lewis said. “Teams that really put themselves out of the way and really just focus on each other and decide what they want to do as a team and take the ‘me’ out of it can be a real special group. And this group has a chance to really have a good February.”

LHS will next play at Olathe South on Tuesday. Tipoff is set for 7 p.m.