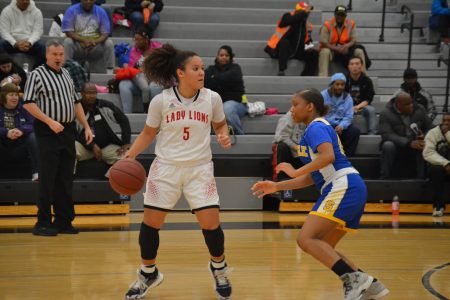 Lawrence High freshman Amaya Marshall looks to make a move past an FL Schlagle defender during a game in the Lady Firebirds Winter Classic on Friday at FSHS on Jan. 31, 2020.

Lawrence High girls head coach Jeff Dickson will admit that he either gives the worst pregame speeches or the best halftime pep talks. There is no in between.

For the second day in a row, LHS girls put together a rally to start the second half, but a sluggish start proved to be too much to overcome. Lawrence trailed by double digits after one quarter for the second straight night in its eventual 60-29 loss to F.L. Schlagle on Friday during the semifinals of the consolation bracket in the Lady Firebirds Winter Classic.

The performance came after the Lions were on the wrong end of a 61-28 loss to Derby (No. 5 in Class 6A) in the opening round. Lawrence (4-7) will now play for seventh place in a midseason tournament that features three ranked teams in Class 6A.

“I’m one of the world’s worst pregame speechmakers in the history of basketball,” Dickson said. “We lost that game in the first quarter. I thought the way we finished yesterday would give us a little boost tonight.”

But Friday’s lopsided defeat capped what has been a tumultuous month for the Lions. Lawrence, which has dropped three games in a row for the first time all season, went 1-5 in January.

And many of the issues that plagued the Lions for much of the month were on full display against F.L. Schlagle.

Lawrence struggled to take care of the rock, especially early on against the Stallions. LHS committed seven of its 20 turnovers in the opening period alone. F.L. Schlagle (6-2) typically took advantage of each miscue, too, by converting an easy layup in transition.

That recipe led to a disastrous start for the Lions, who trailed by an 18-7 margin after one frame. F.L. Schlagle eventually took a 31-14 lead into the locker room at halftime, an advantage that was made possible by Lawrence’s 12 turnovers.

“I just felt like we kind of relaxed and let their pressure get to us,” Dickson said. “All of a sudden we were passing the ball right to them. We reverted back to showing our inexperience.”

As was the case the night before, LHS put together a run to start the third quarter. Lawrence’s lineup of Amaya Marshall, Ella Stewart, Layla Harjo, Serenity Keo and Ozi Ajekwu came out energized, and eventually cut the deficit to just 13 points with 3:42 left in the third quarter.

Stewart scored 4 quick points, including a basket off her own missed 3-pointer. Ajekwu netted two buckets from the post, one of which came off an assist by Keo. Marshall and Keo were key contributors on the defensive end, holding the Stallions to just three baskets in the first four-plus minutes.

That lineup eventually got tired, however, and F.L. Schlagle reclaimed control with a 5-0 run to close the third quarter.

“I’m really good at halftime speeches,” Dickson said. “We are resilient; we try to bounce back. But you can’t just continually kick the ball around for a half against teams ranked in the top-five in the state.”

It remains to be seen how the Lions will respond when they square off with Junction City at 10 a.m. Saturday in the seventh-place game. But it could be a pivotal game with just one month remaining in the regular season.

“We have to decide what we want to be,” Dickson said. “I think the biggest mistake that I made is we were hard on them early, trying to stay at the standard that we were at. With the inexperience that we have, I think that was asking too much.”

The Lions have dropped three straight contests, while losing senior Sophie DeWitt in the process. She suffered an injury against Gardner Edgerton on Jan. 21 that could have her on the shelf for the remainder of the year.

As a result, Stewart and senior Paiden Bell figure to lead a youthful team that is trying to right the ship over the final month of the season.

“We have to get back to working on a consistent basis on the things that we want to hang our hat on,” Dickson said. “We need to stop worrying so much about winning games, and more about the process and getting better every single night out.”