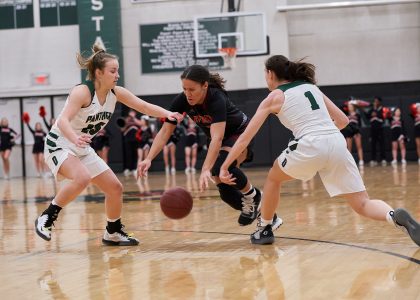 Lawrence High's Amaya Marshall (5) attempts to cut through the defense of Sydney Niles (1) and Heather Mills (25) of Derby during the opening round of the Lady Firebirds Winter Classic on Thursday at FSHS on Jan. 30, 2020.

Anytime one of the premier basketball programs feels the need to press in the third quarter, it must mean something is going right for the team facing Derby.

That was the case when Lawrence High’s girls basketball team went on a run to start the second half. Derby, which led by a 36-8 margin at the intermission, went back to its full-court pressure defense to close out the third quarter after LHS started hitting shots in half-court situations.

It proved to be all the Panthers would need in their 61-28 win over the Lions in the opening round of the Lady Firebirds Winter Classic on Thursday at FSHS. LHS (4-6) will now move to the consolation side of the bracket, while Derby (8-1, No. 5 in Class 6A) will advance to the semifinals.

“I like when a team is so concerned about us that they are going to full-court press up 30,” LHS head coach Jeff Dickson said. “That makes me feel good that we are doing some good things. I liked that we battled back.”

In a lot of ways, Thursday’s opening-round tilt served as a good opportunity to see where the Lions stack up with the elite teams. LHS began the year with a 62-33 loss to Topeka High (No. 1 in Class 6A), which also advanced to the semifinals of Free State’s midseason tournament on Thursday.

But it had been quite some time since Lawrence faced a team of that caliber.

While the final score wasn’t what the Lions had hoped for, there were some moments in their latest loss that illustrated how much they have grown since the season opener. For proof of that, just look at the third quarter.

Trailing by nearly 30 points at the intermission, Lawrence managed to put together a run to begin the second half. LHS got open looks early in the third quarter, and took full advantage of it after hitting just three shots in the entire first half.

Lawrence senior Ella Stewart knocked down a pair of 3-pointers on her way to a nine-point effort in the third quarter. Amaya Marshall also hit a 3-pointer, while Layla Harjo converted on one of her three field goal attempts.

“I thought we competed,” Dickson said. “We hung our heads a little bit in the first half, but we did a better job in the second half of playing through that part, which I think is growth for this team.”

Derby then utilized its full-court pressure defense to create turnovers over the final few minutes of the third quarter, which eventually helped the Panthers pull away for good.

DHS had three players reach double figures in the win, led by a 25-point performance from Maryn Archer. Stewart led the Lions with 12 points in the loss, which included her knocking down three triples.

“For (Stewart) to step up and hit those shots, I think that’s going to be a huge turning point for her in the season,” Dickson said. “For us to be where we want to be, Ella Stewart is one of our best players; We need her at her best.”

Lawrence will now face FL Schlagle in the consolation bracket at 5 p.m. Friday.