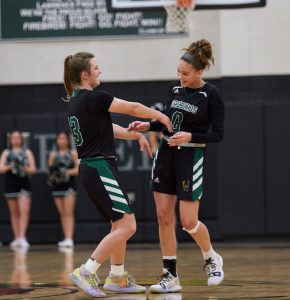 Free State senior Caely Kesten (13) celebrates with teammate Evy Harrell (0) after a made 3-pointer during the opening round of the Lady Firebirds Winter Classic on Thursday at FSHS on Jan. 30, 2020.

With approximately 20 seconds left in the second quarter, Free State’s girls basketball team elected to hold for the last shot.

Senior guard Caely Kesten eventually darted through the FL Schlagle defense before dishing a precise pass to the left wing. Junior Evy Harrell was there to receive the pass and immediately drilled a 3-pointer in one smooth motion at the buzzer. The two proceeded to chest bump at midcourt in celebration.

The sequence spotted FSHS a 4-point advantage at the intermission. More than that, though, it was emblematic of what worked for the Firebirds in their 69-55 victory in the opening round of the Lady Firebirds Winter Classic on Thursday at FSHS.

As a team, Free State (5-5) drilled nine 3-pointers to advance to the semifinals in its midseason tournament for the second year in a row.

“We keep talking all year long that our best basketball is ahead of us,” FSHS head coach Nick Wood said. “The girls have the ability to go out there and play that way.”

But that wasn’t the case Thursday night, as Free State got back to .500 with an impressive shooting performance. Several players were responsible for the Firebirds setting their season-high in points, which was actually 12 points more than their previous personal-best mark.

Junior Shannon Clarke led the way with 26 points on 10-of-15 shooting, including a 4-for-6 effort from long range. Kesten, a Northwest Missouri State signee, poured in 16 points on a 6-of-13 clip from the floor.

Yet it was junior Daeci Jaillite-Walker who provided the necessary spark off the bench early on. She knocked down a pair of 3-pointers in the first half en route to a 14-point performance.

“(She) has that in her,” Wood said. “When she plays like, she makes us a really good basketball team. It was so good to see her get rewarded for the type of player that she is.”

Jaillite-Walker’s first 3-pointer came at the 3:15 mark in the opening period, which gifted the Firebirds a 9-8 advantage. She later hit a midrange jumper in the final minute of the first quarter, pulling FSHS within 12-11 at the end of one period.

FSHS drilled five shots from beyond the arc in the first half, but it was the team’s emphasis on getting to the rim that really set things up. And that continued to be the case for much of the second half.

The tandem of Clarke and Kesten contributed to a 23-point outburst in the third quarter to help FSHS pull away. Clarke scored 12 points on two triples in the third period, while Kesten hit one 3-pointer and recorded 8 points over that eight-minute stretch.

The Stallions (5-2) never really had a chance after that, as the Firebirds led by double digits for the duration of the fourth quarter.

Free State, which netted third in this event in 2019, will face Derby in the semifinals of the Lady Firebirds Classic. Tipoff is slated for 8 p.m. Friday.

“This is an opportunity for us to get better,” Wood said. “We are going to play really good teams this weekend no matter who we play. The goal is to continue to get better and continue to figure out who we are. We took a great step in the right direction tonight with that.”