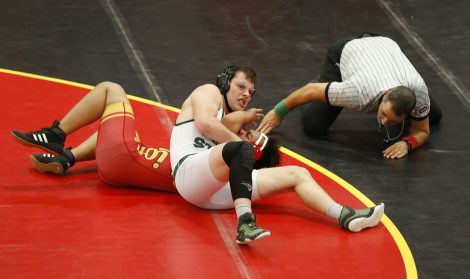 Given the history of the City Showdown and the intense atmosphere, Free State senior Lou Fincher felt a bit of pressure going into Wednesday’s match against Lawrence High.

“But I (expected) our team to win because we’re a really good team this year,” Fincher said.

Free State defeated LHS 48-25 in the wrestling City Showdown with the Firebirds dropping four matches — two of which were forfeits.

Coming into Wednesday’s match, Fincher wanted to continue Free State’s winning streak over LHS. Fincher hasn’t lost to LHS throughout his four-year career as a Firebird.

“Well I’ve watched a lot of the wrestlers from the past few years wrestle on this night,” Fincher said. “It’s really special because it’s like their last time wrestling (against LHS), and I felt the same way.”

Fincher is the lone senior on the Firebirds’ varsity squad, a distinction that LHS senior Will Maas shares for the Lions’.

“It’s really tense,” Maas said of the City Showdown. “I’m just trying to think and focus, and at the same time all the lights are here.”

Maas was somber after the dual with it being his final match, and he said he’ll miss competing alongside his teammates.

“It just kind of feels special,” Maas said. “It’s kind of sad at the same time. I’m going to be out of here and I won’t be able to see all the guys.”

Although Free State won the dual convincingly, it was a series of tight battles on the mat for both sides, especially with Maas and Fincher.

Maas wrestled Free State sophomore Zach Shepley in the 145-pound division and led most of the match. However, fortunes turned quickly in the second round as Shepley broke Maas’ hold and pinned Maas for the win.

“I was killing it,” Maas said. “But he broke my lock and put me in a bad position. Then (the match was) over. I’ve got to condition (because) I got tired.”

Things turned out a little better for Fincher, although the Firebird senior had to work for his victory. He wrestled LHS junior Logan Farrell in the 132-pound division, and has wrestled Farrell multiple times over the years.

Fincher dragged the match out partly because of Farrell’s skill but also because he was watching the clock and going for the major decision — otherwise known as winning a decision by eight or more points.

“He does a lot of what I do, so it’s hard to score on him,” Fincher said. “But I feel like I controlled the whole match.

“I just wanted to score as many points as I could and I was trying to see how much time was left.”

Even though he didn’t get the major decision, Fincher and the Firebirds got the win over their crosstown rivals and were able to keep the streak going.

“We’re the best team in Lawrence,” Fincher said. “It feels good never losing to LHS, like we’re the reigning champs.”