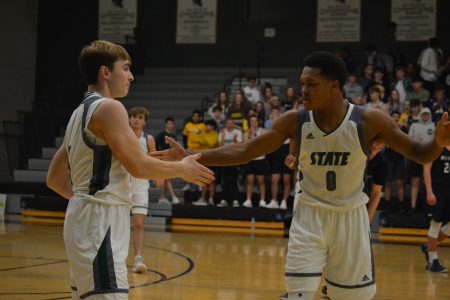 Free State players Wyatt Durland (left) and Kris Daniels (right) celebrate a turnover during a game against Mill Valley on Wednesday at FSHS on Jan. 29, 2020.

It was obvious within the game’s opening minute that Free State’s boys basketball team understood the importance of sharing the rock.

FSHS junior Andrew Piper scored the first basket of the contest, which was really a credit to a nice find by senior DK Middleton. That particular sequence set the tone for the rest of the night, as the Firebirds netted 18 assists on their 26 baskets in a 64-32 victory over Mill Valley on Wednesday at FSHS.

With the win, Free State (No. 7 in Class 6A) improved to 9-3 on the year, which includes six victories in seven games this month.

“We are a team that is hard to scout if we can get anybody 10-15 points a night, and I think we proved that,” FSHS head coach Sam Stroh said. “I thought we shared the ball and limited our turnovers. It was good stuff.”

FSHS jumped out to a 9-0 lead in the opening three minutes of the contest and led for the remainder of the night. There was even a running clock for much of the fourth quarter, with the game well out of reach. 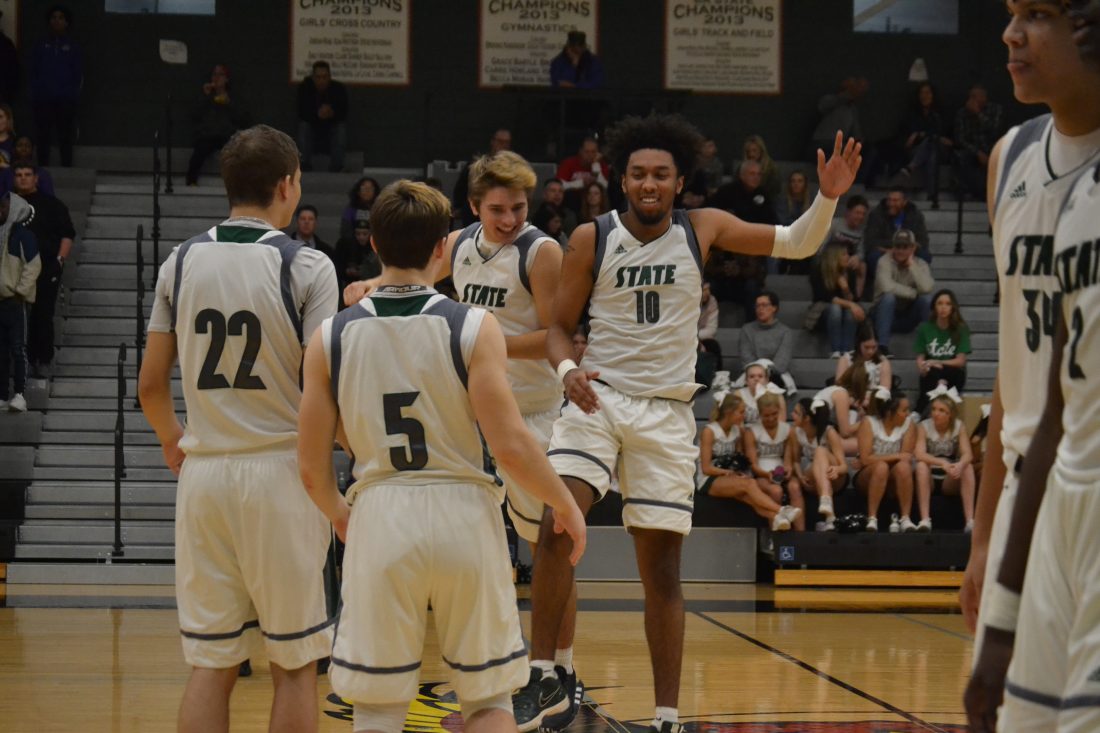 Free State senior DK Middleton (10) celebrates with his teammates during a timeout in a game against Mill Valley on Wednesday at FSHS on Jan. 29, 2020.

Mill Valley (6-7) pulled within 9-8 at one point in the opening period, but the Firebirds made the extra pass to help the hosts net three baskets to close out the opening period. Middleton, senior Alyus Wisdom and sophomore point guard Mozae Downing-Rivers were credited with the three assists on as many baskets, helping FSHS claim a 16-10 advantage after one quarter.

Free State proceeded to register 10 assists on its 13 field goals in the first half, taking a 31-20 lead at the intermission. On back-to-back possessions in the second quarter, Middleton drove to the rim and dished the ball to junior Miles Branch when the Jaguars swarmed him in the lane. Branch finished off both plays with a layup.

“Our offense is designed that way. We are not trying to isolate anyone off the bounce,” Stroh said. “(Mozae) is about as unselfish point guard as there is. I think overall it was a good team win, and I liked the way we played.” 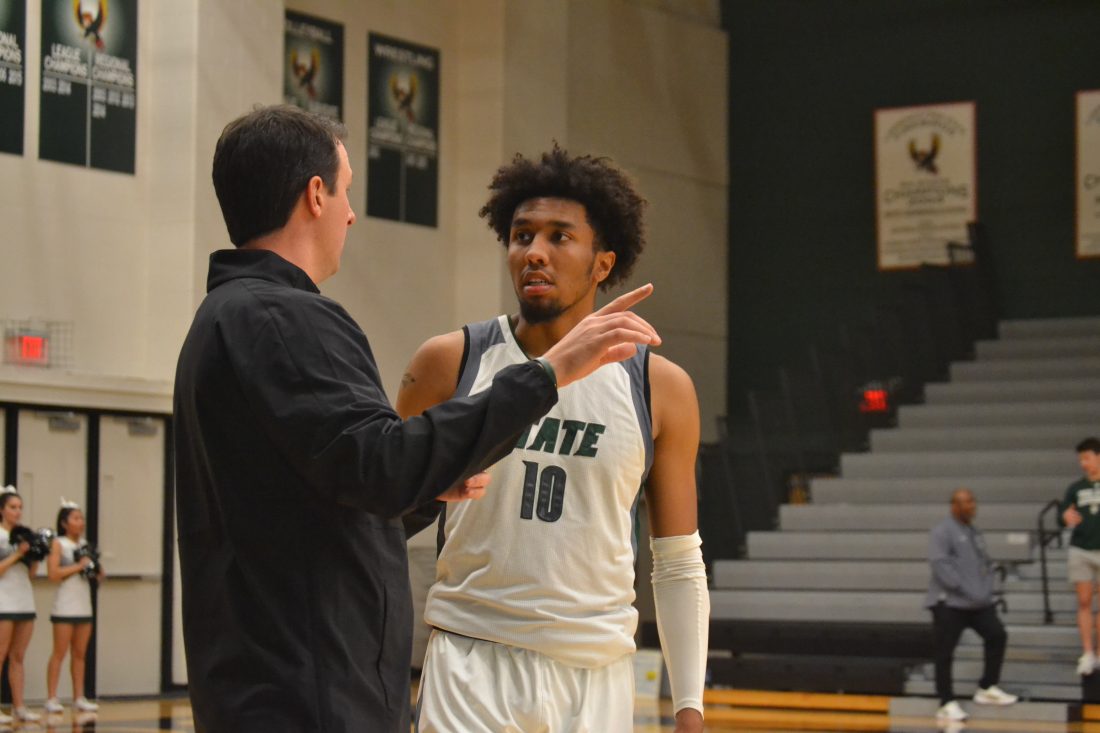 Free State senior DK Middleton listens to head coach Sam Stroh during a game against Mill Valley on Wednesday at FSHS on Jan. 29, 2020.

Middleton found Piper for easy layups on consecutive baskets to start the third quarter. As a result, Free State removed any doubt about the outcome with a 14-2 run to start the second half.

Most of Free State’s offensive production came from players finding the open man. Middleton led the way with six assists, which was four shy of matching the program record for assists in a game set by Nick Devin in 2006.

Branch and Piper were the biggest beneficiaries of the team’s prolific passing in the win. Branch led the way with 20 points on 8-of-10 shooting, while Piper went 7 for 8 to add 14 points.

Free State’s emphasis on sharing the rock really began a few days ago, however.

The ball seemingly didn’t move enough in Free State’s 44-39 loss to Bishop Carroll in the championship game of the McPherson Invitational. It put a sour end on an otherwise strong 2-1 clip over the weekend, including one win against a ranked foe.

“We moved the ball and we played like a team (tonight),” Piper said. “That what we wanted after that loss.”

Stroh actually challenged his team in the ensuing film session to not let the ball get stuck, and it was a key reason why Free State scored over 60 points for just the third time this season. As a result, the Firebirds are feeling optimistic about where they are at entering the final month of the regular season.

“We are much better than where we were before we headed to McPherson,” Stroh said. “We are just looking like a different team, kind of a team on a mission.”

Free State will play host to Olathe East on Tuesday.